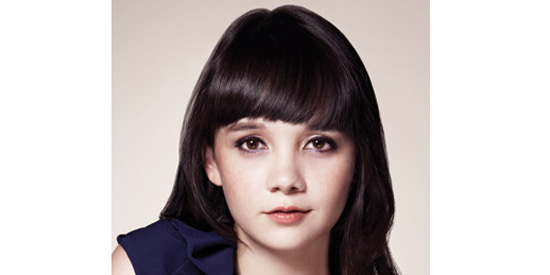 Half-British, half-Pinoy Asha Cuthbert is one of the 12 contestants competing in the reality show, Supermodel Me Season 3. The winner will receive $20,000 and other prizes.

Two Pinays are making their mark on the newest season of Supermodel Me airing locally on KIX via SkyCable Channel 63.

Of the two, Asha Cuthbert became available for a phone interview with PEP.ph (Philippine Entertainment Portal) to help promote Season 3 of Supermodel Me.

This 20-year old looker proved to be an engaging subject, even though she was chatting with us miles away: she in an undisclosed location abroad, while PEP.ph is in the Philippines.

She says, "If the shoot has to be more feminine, more sexy, then it looks completely wrong on me because I just look like I'm some sort of child-porn!"

How did she overcome this seeming disadvantage?

"It really depends on the stylist actually because even if they gave me a mature look, it wouldn't match, so the stylist tries to make it look right for my face, and dependent on the outfit."

Asha, who grew up in Hongkong, has her Filipina mom to thank for her Asian looks and her British dad for her Caucasian features.

Yet she considers herself more Asian than anything, owing to how her mom brought her up, her "really big family back in the Philippines," and that when she is Hongkong, "all my friends are Chinese."

She did give her British heritage a chance though by residing there for one year, after which she concluded that "I didn't like it. It was the people, the culture and I kinda clashed. Although I'm half-British, I understand how they think but then the Asian part of me takes over. I just did not fit in anymore."

What does she like about her Filipino roots? Has she lived here?

"I went back last year, I go back every three years or so and stay for a month or so."

Of course, nothing beats the Philippine weather so that is a big reason why Asha likes coming back here, even though she gets sunburnt all the time.

But the best thing about the Philippines for Asha is, "It keeps me grounded, it is not like my family has the best of technology and sometimes they still have to use the water pump so it's a very village life, and I'm a part of that. It kinda reminds me that I can't take things for granted."

Her mom is a native of Mindoro and it is this beautiful, rustic province that Asha speaks of so fondly.

She also tells us the best things about the Filipina in her. "My mom being very, very hardworking. She has been through a lot in her life. She really kept me grounded." She relates that when she lived alone in Singapore, she'd remember to keep everything neat and tidy just like how her mother did it.

Getting into Supermodel Me wasn't all that hard for Asha as the casting group got in touch with the modeling agency she was part of. She had been working for them for just over a year; doing editorials, advertorials, and catalogues. The unconventional thing about her casting was that they conducted their interviews through Skype, where she was asked questions like "how will you treat the other girls?"

Asha says they must have liked her based on her personality. What other edge does she have in order to win Supermodel Me?

She muses for a while, "I actually have no idea! Some of the girls have about the same experience as me and I think we are all very fresh and I think having less experience is better. Because for some of the girls who have more experience, that kinda gets in their way because they get used to what they know. But because we're fresh, we are open to new ideas and I don't mind being molded to the situation."

The hardest thing so far that Asha had to overcome was being in bottom 3. She recalls, "it was terrible. I felt like crying then, holding on to the other girls beside me, it was really difficult."

What keeps her going is knowing that for some reason, "I always felt like I was going to the end," she shares. "I didn't think I was going to win but I knew I wasn't gonna go home like randomly in the middle of the competition. I felt like, I was supposed to be there. I didn't think that it was my time to go," she says of her trip to the bottom 3 in the latest episode that aired.

Having a background in video editing also allows for Asha to also appreciate and breakdown the technical aspect of Supermodel Me.

She candidly remarks, "I sometimes feel that if I were the editor I would have put so much more in to give it more of a dramatic twist or something. I feel it should be more than an hour because there is so much that goes on behind the scenes."

Asha shares that with all the cameras on, catching every move and random conversation the girls have, it is definitely hard to trim everything down to one hour of airing. "We don't really have a proper topic when we talk so I don't know how they pick up the material."

Does having video editing as part of who she is benefit her at all in this aspect of the competition?

"I am more cautious, especially when I know there are cameras around. I know how to present myself a bit better, especially when the judges told me I was a bit shy in the first few episodes, then I came out of my shell."

We are curious, does Asha have any Filipino celebrities or models she would like to work with? She is very honest in admitting, "I don't know that much about that. Even when I'm in the Philippines, my cousins don't see me as like a supermodel, so I don't really know much about the Filipino media business."

Asha has a no-nonsense fashion philosophy, "Like when I go out, I don't really pay that much attention, I just dress casually. My casual is whatever I'm comfortable in, a t-shirt and jeans, and I don't put much jewelry, and I never wear high-heels when it's my private time, I'm always in my flats, my Doc Martens."

She has even earned the moniker Doc Martens girl on Supermodel Me because she never really liked wearing heels and instead stuck to her guns by wearing her flats.

For Asha, what's going to be her next biggest challenge on the show?

"There are more stuff that I haven't done. Like in the first episode, I never did bikini before. So now more of the modeling, runway etc." and not just the posing for editorials she has been used to. She tells us that to overcome the unknown and challenges like that, she just "has to be professional and deal with it," even if she sometimes feels that her body isn't right for all that kind of stuff.

Supermodel Me Season 3 will air in the Philippines every Tuesday night at 10pm on KIX SkyCable Channel 63 for Metro Manila, Channel 82 in Cebu and Channel 96 in Davao. For the Asian region, Supermodel Me can be seen on KIX and KIX HD.