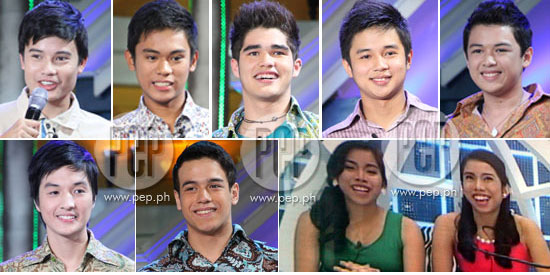 The colorful decade of the '70s made a comeback last night, April 8, at the opening of Pinoy Big Brother Teen Edition 4, ABS-CBN's flagship reality show.

The '70s was the featured decade to honor the time when the show's titular Big Brother, or Kuya, was a teenager himself.

Hosting the show for Kuya were Toni Gonzaga, Bianca Gonzales, Robi Domingo, and the new Sidekick ni Kuya, John Prats. To open the show, each of them performed in a dance number featuring popular ‘70s hits.

Other Kapamilya artists and former PBB housemates also performed in their own '70s-inspired numbers.

First showing off their dancing prowess were the housemates of PBB Unlimited led by the Big Winner Slater Young. He was joined by runners up Pamu Pamorada, Joseph Biggel, and Paco Evangelista as well as Divine Mailand-Smith and Kevin Fowler.

True to the show's '70s theme, the housemates came out of a large disco ball, before being interviewed by the host, and excorted to the Big Brother house.

First up was Tom Doromal of Davao City. This 16-year old was dubbed Bukid Prince ng Davao because he lives in a farm that his family owns. He confessed that he knows how to work in a farm, because his happy family taught him how to be productive.

Next was Roy Requejo of Naga City. At the age of 18, this Boy Sipag of Naga had gone through several odd jobs to help his family. His parents were separated, and so he had stood up to be the breadwinner at an early age.

Half-British and half-Pinoy Ryan Boyce hails from Pampanga. The 16-year old Pilyong Binatilyo ng Angeles confessed to living an easy life. In the interview, he said his idol is former housemate Baron Geisler, because he is also as pilyo as the controversial actor.

Yves Flores is the Masunurin Son ng Tarlac. This 18-year old was introduced to be the season's good boy. A son of two teachers, he believes the discipline his parents impose on him is good for him. He's even proud of his 7PM curfew.

The 16-year-old Bunsoy Tisoy ng Rizal named Vincent Manlapaz lives with his grandmother and aunt. He said his mother works in Bahrain, while his father left them for his third wife.

Chinese-Filipino Alec Dungo is popular in the University of Santo Tomas as a matinee idol. This 18-year old Chinito Guwapito ng Laguna has earned varius awards from male pageants, due to his height and good looks.

The last male housemate to be introduced was Filipino-Kiwi Kit Thompson. The 15-year old Kid Tangkad ng Pampanga lives an easy life because of his father working as a pilot. He said he joined PBB to payback what his parents had given him.

After this, two female housemates were shown entering the house earlier that day. Host Robi Domingo visisted the housemates in their hotel to take them to the Big Brother house.

The housemates were identical twins Joj and Jai Agpangan, both 17 years old. The Double Biba ng Bacolod were delighted to see the house early. They also entered the house with their mother, who advised them to "not have high expectations" before she left her daughters.

Before the show ended, Kuya was shown to have given several tasks to the new housemates. Kuya had asked Joj and Jai to paint several Easter eggs. A special task was also given to the twins: one of them should pretend to be a guy.

The male housemates were instructed to wear covered goggles as they learned about each other without their sense of sight.