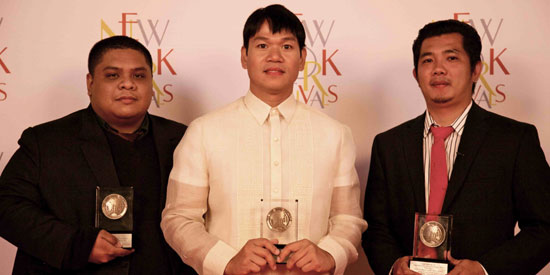 "We are honoured to receive this silver medal from the NYF. Lapnos was a heartbreaking yet powerful story that moved all of us who produced it. But what makes this story truly remarkable, apart from the recognition it recently received, is its power to raise awareness on this small, forgotten hospital in Mindanao . Even now, we continue to receive pledges for the hospital and its patients, and for this we are truly grateful. We dedicate this award to the burn victims who shared their story with us and hope that more can be done to alleviate their suffering," says Angeli Atienza, program manager for I-Witness’ Lapnos episode.

"This documentary was passionately executed by the men and women of I-Witness. We dedicate this award to our dear 12 year old Christy, who succumbed to complications from her burn wounds. God bless you and God bless Mindanao," adds Executive Producer Lea Llamoso.

Front Row’s "Yaman Sa Basura" tells the story of twin boys risking life and limb working in an urban mine in order to help their family. "Bente Dos" (Twenty-Two), on the other hand, narrates the life of a couple living in Manila ’s slums, together with their children—all 22 of them.

"GMA News TV is just a year old channel. With Front Row's two medals, we take so much pride and honor to receive more medals than any other Philippine network from the New York Festivals this year. Our local audience has embraced the non-traditional, no-host, no-voiceover documentary format and we are glad that jurors from international award-giving bodies have appreciated it as well," says Johnson Tam, Program Manager for Front Row.

Meanwhile, three GMA entries brought home Finalist Certificates including the I-Witness episode on compressor mining presented by Peabody award-winning journalist Kara David dubbed Gintong Putik; the GMA special that delved deep into the current situation of the country’s education system in Report Card; and Born To Be Wild’s The Born Expeditions Finale: The Monster of Mae Klong and The Great White Shark where, in the presence of a Philippine wildlife team, a world breakthrough in sting ray research was documented on video.

The New York Festival International Television and Film Awards is one of the world’s most prestigious award-giving bodies dedicated to both the television and film industries. It encourages next generation story-tellers to break new grounds by honouring the winners within each competition each year.