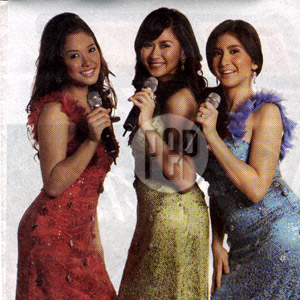 Orphaned at an early age and separated by fate, the Jewel Sisters will reunite under an unexplainable force to create beautiful music together.

This is the storyline of Pangarap na Bituin, the musical teleserye that will premiere on ABS-CBN Primetime Bida on September 3, 2007.

In Pangarap Na Bituin, Sarah Geronimo plays Emerald Mendoza, a singer who resides in Boracay, where her adoptive parents brought her. She was orphaned at an early age when Mayon Volcano erupted and killed her parents. She and a younger sister, Ruby (Maja Salvador), grew up in an orphanage, where she became close to a fellow orphan, Terrence Rodriguez (Jericho Rosales). Emerald and Ruby were separated from their elder sister, Sapphire (Rica Peralejo).

The song "Pangarap Na Bituin" is the theme of the Sharon Cuneta movie Bukas, Luluhod ang mga Tala. This 1984 classic film tells the story of Rebecca (Sharon) who is born to a poor family and vows to exact revenge on those who oppressed her and her family during their time of need.

Directed by Erick Salud and Trina Dayrit, Pangarap Na Bituin is not a remake of the Megastar's movie but its theme song is actually a revival of Sharon 's original hit.

Ruby (Maja) is the youngest of the three. She was forced to leave her sister Emerald at the orphanage when she was adopted by Bernard "Papa Berns" Bautista, a gay showbiz reporter who gave her the name Kimberly Bautista. She will be reunited with Emerald and they will embark on a journey to find their other sister and pursue their dream.

Peaceful and submissive, Ruby serves as the mediator between two opposing sisters. She may not be as vocally adept as her older sisters but Ruby is the better dancer among the three Jewel Sisters. Afraid to grow alone, she longs to meet the man who will sweep her off her feet. Unknown to her, they have already met.

Sapphire (Rica) is the eldest Jewel Sister. She lost her siblings to a calamity and took the name Bridget Ramirez. Pretty, poised, and sociable, everyone loves having her around. But beneath the warm and welcoming façade is a girl fighting her insecurities. Sapphire's love for music will lead her to her younger sisters Emerald and Ruby. But her love for fame might stand between her relationship with her siblings.

Alone and nowhere to go after the Mayon Volcano disaster, Emerald (Sarah) becomes desperate. Luckily, a musician named Cocoy Mendoza takes her in and encourages her to develop her talent in singing. Spunky and willful, her only wish is to become a renowned singer and find her two sisters. She grows up and becames a modest acoustic performer in Boracay. When her path crosses with childhood friend Terrence (Jericho), he helps her become a pop star and is instrumental in the reunion of the Jewel Sisters.

However, Terrence's manager and aunt, Alberta Tuazon, doesn't approve of his assistance and friendliness towards the three siblings. Will Alberta succeed in tearing down Emerald?

The Jewel Sisters are all set to take center stage and bring beautiful music to the airwaves and to the TV screen. Watch for the newest singing sensation in Pangarap na Bituin, which will premiere on the Kapamilya Network on September 3.