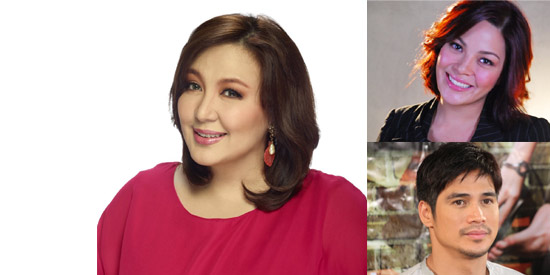 Five months after becoming a Kapatid star, Megastar Sharon Cuneta is slated to return to television via her own talk show called Sharon: Kasama Mo, Kapatid.


Co-produced by Mega Productions, Inc. this daily talk show will start airing on TV5 by May 14. It is slated to have a 4:30 pm timeslot.


After 30 years of blockbuster movies, chart-topping music albums, sold-out concerts and well-received TV programs, Sharon marks another milestone in her showbiz career as she begins her first project in her new home: TV5.

The Megastar admits that her transfer to TV5 late last year has given her renewed energy to start a new chapter in her life. Beyond the glitz and glam of the industry, Sharonbelieves that the real meaning of life could be found in the celebration of real life stories from everyday people.

“I want this show to be my legacy. I wanted a show with familiar elements to ir pero mas malalim po in terms of featuring regular people with remarkable lives.

When asked if she is willing to have KC Concepcion and her ex-boyfriend, Piolo Pascual, as guests on her show, Sharon pointed out: “Gusto ko iguest si KC but I don’t see why I should guest Piolo. Kasi…una sa lahat, lalagyan ng kulay ng ibang tao. Pangalawa, we don’t really need Piolo.”

The Megastar continued: “With KC, I think it will be understandable she’s under Viva…sana nga si Sarah [Geronimo] and si Juday [referring to Judy Ann Santos].”

She also gave names of her past leading men whom she would like to feature as guests. “May isa na dito si Aga [Muhlach], si Edu [Manzano] nandito na rin [sa TV5].”

Since she transferred to TV5 after being identified with ABS-CBN for the past 23 years, Sharon was criticized by fans for being an “ingrate” and being blinded by the lure of money.

“So it’s not about the one-billion-[peso] contract…


Airing from Monday to Friday, the daily talk show promises viewers a refreshing format with features of real lives: celebrating triumphs while learning from mistakes-turned-inspirations.

To advance the modern-day “pagmamalasakit,” the show will also take on a proactive stance to caring and service through a network of advocates, supporters and philanthropists working together for the common good Pinoys, especially those in need and programs varying causes through a collective, continuous and long term fund drive.