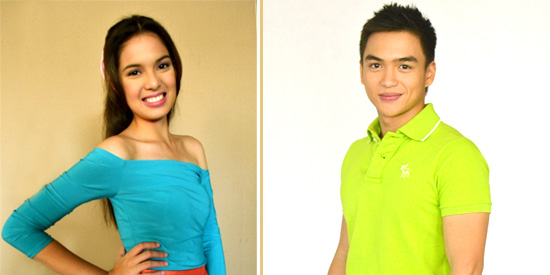 Right before the curse turns the light-hearted teenager Aryana into a mermaid, ABS-CBN’s primetime teleserye is made even more exciting by characters who spice up the tale.

At the moment, Aryana (Ella Cruz) is caught in what seems to be a brewing love triangle with childhood friend Marlon (Paul Salas) and her new classmate Hubert (Dom Roque).

Fate is also drawing Aryana closer to her biological father Victor (Tonton Gutierrez) and should father and daughter reunite, rival Megan (Michelle Vito) will have to accept Aryana as her sister. Otherwise, a spiteful family drama is on its way.

At a pictorial held last May 24, on the 13th floor of the ABS-CBN Network’s ELJ building, the four main teen cast of the soap appeared to be “hanging out” more than “working” on lazy Thursday afternoon.

They have quite back stories to tell.

Dom is a 21-year-old sophomore and tourism major at the College of Saint Benilde. His role in Aryana landed on his lap by surprise.

It still surprises Dom that three days after that audition, he already shot scenes for Aryana.

Portraying Hubert in the soap is a challenge for Dom who tried acting once. He appeared in the Kapamilya 2012 teleserye, Habang May Buhay, where he got to act with Judy Ann.

ALONG COMES A KONTRABIDA

The girl who plays the snooty step sister of Aryana is far from having a mean bone. Michelle Vito is one young, soft spoken, gentle lass. The fact that Ella has been a good friend of hers since they were seven years old makes playing a kontrabida a challenge for Michelle.

This is not the first time she is playing an antagonist. Before she got the part in Aryana, 14-year-old Michelle also took on the mean girl role in Nita Negrita, a GMA-7 afternoon soap.

“Basta tuwing may role po, palaging may kontrabida,” says the tisay, doe-eyed beauty who went to a go-see four times prior to being given the role of Megan.

Michelle shares that she thinks about the times she got in arguments and misunderstandings with others.

She dreams of playing the bida one day, too, she says. For now she looks up to Julia Montes’ compelling acting in Mara Clara and Cristine Reyes’ fierce role in No Other Woman.

Aryana airs on ABS-CBN’s Primetime Bida from Monday to Friday.