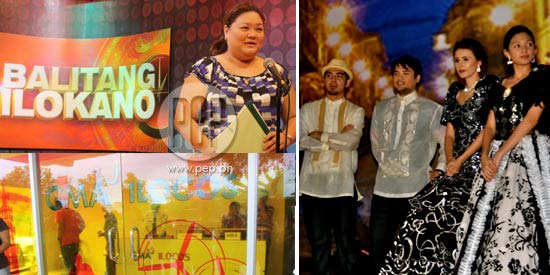 (From left) Ms. Rikki Escudero, GMA-7's Vice-President for Regional TV; Mark Herras, Geoff Eigenmann, Jackie Rice, and Jennica Garcia were among those who graced the recent launch of GMA Ilocos.

GMA Network is expanding its reach in northern Luzon by establishing a broadcast facility in the Ilocos region.

GMA Ilocos, which goes on air starting June 18, is expected to service an estimated total of 208,110 households.

This is the 5th originating station of GMA-7 after establishing stations in Dagupan, Iloilo, Cebu, and Davao.

Balitang Ilokano will be broadcast Monday to Friday from 5:05 pm to 5:55 pm.

GMA Ilocos will be the first to use the multi-link system designed by Engineer Elvis Ancheta, who is the Vice-President for GMA-7’s Transmission Regional Engineering Department.

“GMA Network has budgeted over P100 million for engineering Cap Ex [capital expenditure] alone,” revealed Engr. Ancheta. “In this two-camera studio, GMA will be running local live news, which is Balitang Ilocano, and will be contributing to national programs such as 24 Oras, Saksi, Unang Hirit and programs in GMA News TV.

“GMA Ilocos is equipped with a satellite uplink facility that allows the station to beam any of its chosen content to Manila or to any of the other originating stations.

“GMA Ilocos is the first originating station outside of Manila that will implement the dynamic, multi-point link system. To reach our viewers, we have three transmitting stations operating in the region: one in Mt. Caniao in Bantay, Ilocos Sur; one in San Nicolas, Ilocos Norte; and another in Abra.


INVESTING IN THE NORTH. According to Ms. Rikki Escudero, Vice-President for Regional TV, they have been preparing to open this broadcast facility for over a year.

“The launch of GMA Ilocos affirms GMA’s commitment to forge ahead and keep expanding regionally but at a pace that is sustainable for our signal, program, and quality events,” said Ms. Escudero during the media launch, which was attended by select members of the media, including PEP.ph (Philippine Entertainment Portal).

“I invite all Ilocanos who didn’t use to have a choice in local programming and view the Kapuso alternative.

“We are investing in the North because we believe in the future of local economies and in catering to the unique needs of a specific local viewership.”

When asked to give details about the P100 million investment of GMA Network, Ms. Escudero said that this includes the expenses incurred in constructing the building in San Vicente as well as the funds used for the three transmitters in their multi-link system.

She added: “The capital expenditure expenses include 1 live remote van, 3 pickup vans [for reporters], and one baranggayan vehicle that will give aid in case of disasters.

Based on their projection, how long will GMA-7 be able to recoup the investment in this broadcast facility?

“GMA Regional TV is part of the mother network [referring to GMA] so the budget is part of the network budget. [Regarding] return of investment, to give you an idea, we launched our satellite station in CDO, Bacolod, and Naga in 2009. In 2010, they were already in the black,” explained Ms. Escudero.

The network executive clarified out that the CDO, Bacolod, and Naga satellite stations were able to recoup the investments made for manpower and operating expenses within one year.

Ms. Escudero also revealed: “Definitely, if there is something happening in Ilocos, we will be here and we can broadcast it live thanks to Engr. Ancheta.”

Guests were seemingly transported to Spanish times as soon as they entered the venue, which was decorated with arches and capiz windows.

A fountain was set up inside the main hall while several pairs were dressed up in elaborate Filipiniana costumes that were popular during the Spanish times.

Geoff Eigenmann, Mark Herras, Jackie Rice, and Jennica Garcia were among the Kapuso stars who graced the trade launch.

The whole day of June 9 was dedicated to events featuring GMA-7 stars. Around 12,000 people took part in the Kapuso Day that started from 8 a.m. until 10 p.m. at the capitol grounds of Laoag City.

During the program, Ilocos Norte Governor Imee Marcos thanked GMA Network for building a new originating station in the region.

This new drama series, which starts airing on June 18, will also feature Isabel Oli, Maxene Magalona, Isabelle Daza, and Marc Abaya, among others.

Mark Herras showed Ilocanos why he is dubbed as the “Bad Boy of the Dance Floor” while Rochelle Pangilinan showcased her sexy dance moves.

Rochelle also asked five guys to volunteer for a dance showdown onstage that elicited the most cheers from the jampacked crowd.

(To watch performances during the Kapuso Day in Laoag, click HERE and HERE)


GMA BICOL TO OPEN THIS JULY. In line with its efforts to strengthen the Kapuso Network's reach nationwide, GMA Bicol will be opened this July.

GMA Naga is currently being seen via Channel 7 but beginning July, GMA Bicol will be seen in other areas of Legaspi, Albay, Camarines Sur, Catanduanes, Masbate, and Sorsogon via GMA TV Channel 12, reaching out to an estimated total of 520,178 households.

In his message shown to the media during the launch, Atty. Gozon said: “The Network is set on capturing the interest of our viewers from the different parts of the country by offering them programs that speak their native dialect. Through these programs, we are confident that we will be able to effectively reach more viewers and enable them to experience the Kapuso brand of Serbisyong Totoo.”

GMA Network President and COO Gilberto R. Duavit Jr. also revealed that the Network’s Ilocos and Bicol stations will be equipped with program production as well as microwave and satellite facilities.

“Both of these stations are equipped with active news gathering systems capable of delivering live news coverage within the originating or neighboring provinces which can be aired locally or nationwide.”