Meet the Final 12 of The X Factor Philippines 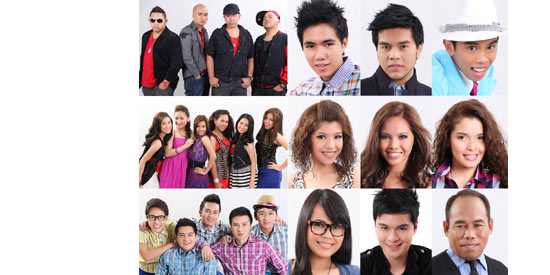 The X Factor Philippines recently unveiled its 12 finalists who will compete in the live shows beginning this Saturday (August 4) and face the fifth and most critical judge in the competition: the viewing public.

Freelance singer Allen Sta. Maria, dive guide Jerrianne Templo, and band vocalist KZ Tandingan, on the other hand, will represent the Girls (solo female performers 16-25 yrs old) as chosen by their judge-mentor Charice with the help of her guest celebrity judge and fellow Pinay pride Cheesa, who recently became a finalist in the hit U.S. singing competition The Voice.

The Groups (16 yrs old and above) category composed of all-male quartet Daddy’s Home, boyband Take Off, and all girl group Lucky Girls won’t be left behind as they were chosen by their judge-mentor Gary Valenciano with the help of guest celebrity judge Jed Madela.

The final 12 will battle it out in the live shows starting Saturday (August 4) at the PAGCOR Grand Theater in Paranaque where they will sing various movie theme songs.

Their future now lies in the hands of the public who will decide via text vote who among them should stay in the competition and who among them shall leave. The finalist with the lowest number of overnight text votes will be booted out of the show.

Whose ‘x factor’ will shine best and who will be exed out of the competition? Who among the judge-mentors will say goodbye to one of their three chosen finalists by Sunday?

The competition gets tougher in The X Factor Philippines' first live show this Saturday (August 4), after Maalaala Mo Kaya. The first elimination night will air this Sunday (August 5), after Sarah G Live on ABS-CBN.