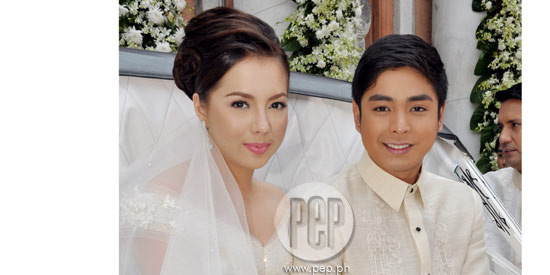 
Julia rode a horse-drawn carriage that had upholstered white leather seats and a retractable roof. The 17-year-old actress wore a wedding gown designed by Paul Cabral as she walked down the aisle to meet her groom Daniel (played by Coco).


The other characters of the soap opera, namely Richard Gomez, Dawn Zulueta, Melissa Ricks, Joem Bascon, Susan Roces, Helen Gamboa and the others were also dressed in Filipiniana attire for the said wedding.


Based on a report aired on Umagang Kay Ganda, the costs of mounting this wedding reached P3 million.


Now down to its last two weeks, Walang Hanggan airs every night after Princess and I on ABS-CBN’s Primetime Bida.


THANKSGIVING CONCERT. After almost a year since it aired on Philippine TV, ABS-CBN’s top-rating drama series Walang Hanggan is all set to treat its loyal fans with a grand concert titled Walang Hanggang Pasasalamat, which is slated to be staged on October 21 (Sunday) at the Smart Araneta Coliseum. Leading the thanksgiving celebration are Richard Gomez, Dawn Zulueta, Helen Gamboa, Susan Roces, Melissa Ricks, Paulo Avelino, Julia Montes, and Coco Martin.

For avid Walang Hanggan fans who wish to attend the Walang Hanggang Pasasalamat, ABS-CBN is going to give away free tickets starting this Saturday (October 13) and Sunday (October 14) from 3 pm to 5 pm at the ABS-CBN Center Road. The delayed telecast of the special concert will be shown on the same day, October 21, after Sarah G. Live!

Meanwhile, for the nationwide thanksgiving of Walang Hanggan, the love team of Dawn and Richard will head to Davao on October 20 (Saturday); as Coco, Julia, Paulo, Melissa and Joem Bascon attend the colorful Maskara Festival in Bacolod.