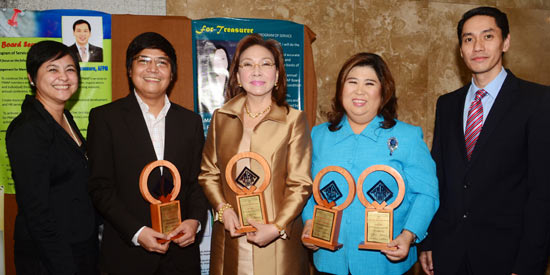 "GMA Network Inc. (GMA) emerged as the big winner at the 2nd People Management Association of the Philippines (PMAP) Makatao Awards for Media Excellence held at Hotel Intercontinental in Makati City on November 28.

"GMA was once again hailed as TV Station of the Year, besting competition for the second year in a row. The prestigious award recognizes the Network’s outstanding contributions in enhancing public understanding of the role and impact of good people management as a member of the mass media.

"For Tiangco, citations like these serve as an inspiration as she said, “’Yung ganitong klaseng recognition, we interpret this to mean na nakikita nila ‘yung mga prinsipyong talagang ginagawa natin sa 24 Oras and that all the more inspires us.”

"Its host, Jessica Soho, one of the country’s most acclaimed broadcast journalists, was in turn honored as the Best Public Affairs Host for the second time.

"Also present in the ceremony was GMA Vice President for Human Resources Development Atty. Gerrome Y. Apolona, who was one of the guest speakers in the event delivering a speech on behalf of GMA Chairman and CEO Atty. Felipe L. Gozon.