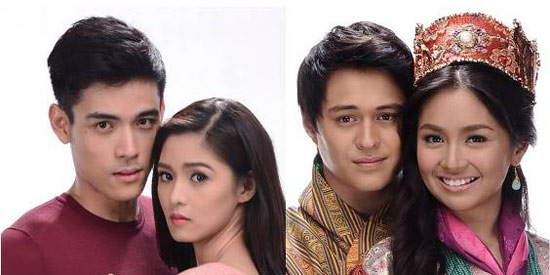 “ASAP 2012 will wrap up 2012 with the year’s 'best of the best' surprises and special performances as it throws the grandest year-end countdown party this Sunday (December 30) to be led by two of the most in demand teleserye love teams today namely Kim Chiu and Xian Lim, and Kathryn Bernardo and Enrique Gil.

"Aside from Kim, Xian, Kathryn, and Enrique’s surprises, also get ready for the holiday treats from Kapamilya teen stars Ella Cruz and Francis Magundayao of Aryana; Khalil Ramos and Sofia Andres of Princess and I; and Jerome Ponce, Janella Salvador, Claire Ruiz, and Marlo Mortel of Be Careful With My Heart.

"Prepare to be amazed for another mindblowing performance from the ultimate multimedia star Toni Gonzaga in ‘T Zone;’ followed by the breathtaking dance number of international Pinoy R&B sensation Billy Crawford in ‘B-Segment.’

"Also, don’t miss the Supahdance showcase of XB Gensan, Amplified Hiphop, and G-Force together with the DJ heartthrob Callum David.