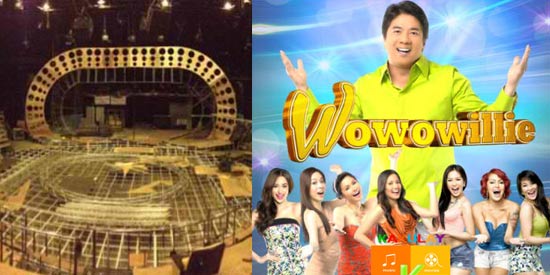 Controversial TV host Willie Revillame is back at noontime with a vengeance—well, sort of.

With his upcoming show, Wowowillie, set to directly compete with rival networks’ daily variety programs—Eat Bulaga (GMA-7) and It’s Showtime (ABS-CBN)—Revillame is reported to level up noontime viewing with a P100 million worth of reformatting that is said to form part of TV5’s plan to attract more profit for the Kapatid Network.

If his more-than-a-decade career as a noontime-show host was any indication, Revillame may seem to be most entirely in his element with the recent reprogramming.

But it may be recalled that it was not always a smooth-sailing career for the man.

Since his days as a co-host of ABS-CBN’s defunct noontime variety show, Magandang Tanghali Bayan (1998-2003), Willie, have had his share of controversies with co-hosts, Randy Santiago and John Estrada, following several complaints from the Movie and Television Review and Classification Board (MTRCB), for using offensive, double-meaning jokes.

But this did not stop his former mother network in making him a bigger noontime star. In 2005, ABS-CBN accorded him with his own variety program, Wowowee, where Revillame was able to establish himself as more than just a household name, but—as referred to by his thousands of followers—a “champion of the masses,” even more so, the senior citizens.

In 2010, however, Willie had a falling out with the Kapamilya network after he dared the management, during its May 4, 2010 episode, to fire entertainment writer Jobert Sucaldito for allegedly insulting the contestants of his noontime program, otherwise he will leave the Kapamilya Network.

Because of this, Willie was suspended by ABS-CBN for reportedly showing disrespect to the management. Jobert Sucaldito was not fired by the KapamilyaNetwork. Willie then invalidates his contract with ABS-CBN in August 2010. A month later, he signed a three-year contract with TV5.

In October 2010,Willie, already a certified Kapatid, launched his primetime variety show, Willing Willie. It was reformatted in May 2011 to Wil Time Bigtime because ofthe infamous “Jan-Jan” incident. In March 2011, Willie incurred the ire of the public after featuring a crying six-year-old boy who gyrated on his show similar to a macho dancer.

But Wil Time Bigtime eventually went off the air on January 5, 2013 to pave the way for Willie’s noontime comeback. Wowowillie is all set to premiere tomorrow (January 26, Saturday), airing from 11:30 a.m.to 2:30 p.m.

For the inside story on the new show, PEP.ph had an exclusive interview with Jay Montelibano, business unit head of the reformatted noontime variety program Wowowillie.

PEP.ph: Whose decision was it to move Wowowillie to noontime?

Jay: It was actually TV5’s decision. There was one night when Atty. Ray Espinosa, the president of TV5 and COO, dropped by and then relayed the idea to Kuya Wil. He acknowledged the need of TV5 also to compete with the other stations and in doing so, they realized that if you want to strengthen the programming of a network, you have to also build your noontime program. They immediately thought of having Wiltime Bigtime, which is now Wowowillie, as the flagship carrier for the noontime.

PEP.ph: How long have you known and been working with Willie?

Jay: Since MTB [Magandang Tanghali Bayan] days. So that was 1998.

PEP.ph: Why do you think Willie has lasted this long?

Jay: He has an impeccable charm with the senior citizens, as well as with the masses. I think it’s naturally not that hard with him, since he too came from humble beginnings, so it’s easy for him to talk their language. And it’s easy for him to adapt to what he feels and sees would be their need.

PEP.ph: Sa pagkakakilala niyo po kay Willie, you’ve been with him through controversies, how do you think he is able to weather all those criticisms?

Jay: That’s correct. Actually, I’m sure they are also going to strengthen the pre-programming and programs that would come after us [Wowowillie] all the way until primetime. And in the recent trade launch that TV5 had, which was held at the Resorts World last week, January 15 to be exact, I saw the other programs that are coming. Pretty exciting.

Jay: Actually, we’ve had a fair share of advertiser revenue and thank you to our sponsors who never really left us after all the controversies. They also know rin kasithat hispluggings, or when he endorses, and his presence in the program also create an eyeball with a lot of viewers.

PEP.ph: Sa tingin niyo, ano ’yong pull ni Willie sa mga advertisers? Why do advertisers stick with him through all the controversies?

Jay: It’s because of the reach, I believe. Whatever he endorses, I receive feedback coming from various advertisers and sponsors na their products have at least doubled if not quadrupled in terms of revenue. Kasi ’yong awareness. Same goes with Unilever, Technomarine, ’yong mga CDO’s of this world, they’re happy because of the awareness, the way their products are being pushed. They are happy of the buyer response.

Jay: The highest was the anniversary that we did in Araneta Coliseum. In fact, the program ran overtime. We were supposed to air for three hours but we went six hours. Six hours na hindi bumitaw ang tao. That was really amazing. I’ve never seen a program that made it that far nang hindi nag-lag ang programming. But for this one, amazing. People didn't leave, people watched the entire show.

Jay: Yes. Wil Time Bigtime started airing May 2011, before that was Willing Willie. So May 2011 up until when we ended, which is January 5.

PEP.ph: How do you plan to compete against ABS-CBN and GMA-7 noontime shows?

Jay: We intend to give our audience good programming, good content. Mas masa ang content, but at the same time, giving our audience the class feel. So pang masa ’yong mga laro, pero class ’yong quality na mapapanood nila—From the games, to the set, to the visual and all.

You know naman Kuya Wil, he’s always been very, very generous to the prizes and to the dole-outs and all. Right now nga ang sa amin, we’re competing against ourselves to do better, more than competing with other programs. So if you already did better before, we know we have to do best this time. So sarili namin, siyempre we want to top it by going one bar higher than how we performed before.

Jay: I’m sure you’ve seen the billboards already. It’s out along EDSA—in Orense in Makati, near Guadalupe; another one is up here in Muñoz, the one in Delta, and soon near GMA-7. On the billboards, you’ll notice Eva Jugueta of PYT [Pretty Young Thing], Ethel Booba is an addition, and Arci Muñoz. Siyempre, the former hosts are also there [Mariel Rodriguez, Grace Lee, Camille Villar, and Lovely Abella].

PEP.ph: Do you know how much is the set for Wowowillie?

Jay: We’re already spending P25 million, just for the set. I think TV5 has shelled out, I think close to P70 million, for the technicals. The facility [in Delta] kasi had to do some refurbishing inside. We had to do some repairs, they had to do soundproof, strengthen the structure. They have to facelift the entirety of the building.


[During the January 23 press conference of Wowowillie, Willie Revillame was quoted as saying that the expenses for the noontime show has already reached P100 million.]

PEP.ph: How do you think of the competition?

Jay: We’re not thinking of the competition right now, seriously. Ang mindset ng lahat, we are out here to do our best, to enjoy. We won’t think of other show’s segment. So what we want to do is to concentrate and focus on what we have. Pagandahin siya at mas maging likeable ng masses.

PEP.ph: How do you feel about the ratings game in the TV industry?

Jay: I’m pretty confident that it will actually eat a lot of like rating points that ABS-CBN and GMA-7 already have. There’s always room for a third player.

Jay: There’s always a million [in cash], house and lot, and a car.