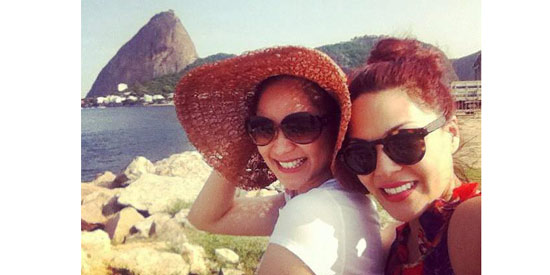 Sarah Geronimo (left) and KC Concepcion (right) went to Brazil so they could watch a Madonna concert.

When it comes to traveling, jetsetter KC Concepcion sure has a lot of things to say.

She candidly shared her observations about her recent travel buddy: newbie traveler Sarah Geronimo who went on a trip without a chaperone for the first time.

On the March 1 pilot episode of Martin Nievera’s comeback talk show, Martin Late @ Night, KC revealed how Sarah transformed during their trip to the vibrant and bustling city of Rio de Janeiro in Brazil.

During this six-day trip from December 1 to 6, 2012, Sarah and KC traveled with Georcelle Dapat-Sy of the dance group G-Force.

When asked about this trip, KC admitted that she took on the role as Sarah’s “Ate.” KC recalled:

“But you know what, we made it a point not to treat her like baby girl, because obviously, we’re almost the same age, and at the same time, she knows she is already a big girl. So we made sure not to make her feel that she was a baby, because these are the things that we need to learn at that age.”

Martin: “So what made you assume that role?”

“She was late everyday, I heard,” said the Concert King turned late-night-talk-show-host.

KC admitted, “Well, we were all late at certain times. But meron mga time talaga na bigla siya [Sarah] magpa-pack. Kasi siyempre she is learning everything. Everything is new and everything is usually done for her, because she has to focus on her work.

“So she just started to pack very slowly, looking at everything, trying to absorb mga lesson niya. Pero may times talaga na nag-switch na kami ng itinerary kasi hindi na namin naabutan, kasi marami siyang inaayos. But it was fun, because at the end of the day, Sarah really changed a lot from day one to the last day that we were there.

“And talagang nag-enjoy siya that when she got home I made sure to let Mommy Divine [Sarah’s mother] know that na-appreciate ko talaga na she even let her [Sarah] go with us. And it was her dream to go to Brazil.”

In past interviews, Sarah admitted that the trip almost didn't push through.

NEW JOURNEY FOR KC. For 2013, the travel junkie KC also revealed to her Tito Martin that she indeed is set to take a new journey—one that would take further and farther her showbiz career.

“We’ve been taping Against All Odds, which is a teleserye that I’m doing with my Ate Judy Ann Santos, Ms. Coney Reyes, Sam Milby, Empress [Schuck], and so many other people. And I’m very excited to do that, we’ve been taping a lot, so I really hope that we get to pilot soon. Kasi matagal na namin hinihintay yun.

“And I just signed a contract with ABS-CBN,” she added. “So I’ll be hosting a new show.”

Of which Martin commended. “I think you host very well. I told you this before on X Factor [Philippines], it’s not an easy show to host, you get emotionally attached.

“But more than anything else, the way you introduced everybody, you give everybody integrity, you give them something to be proud of,” Martin added.

The X Factor Philippines—a reality music contest, adapted and part of the X Factor UK franchise—aired in the second quarter of 2012 on the KapamilyaNetwork. This show featured KC as main host while Martin, Gary Valenciano, Pilita Corrales, and Charice Pempengco served as judges.

A grateful KC told Martin, “I’m so happy to be doing that show with you. It sounds like fun talaga. I hope we get to do a Season 2 of some sort, or another show with us together.”

In response, Martin replied, “And you can’t tell us yet what you’re hosting yet, obviously.”

To which KC jokingly responded, “Well they’ve been very secretive about it with me, so I have to be secretive with you about it too, because I don't know much.

But ending on a serious, but positive note, KC added, “It’s going to be an exciting 2013. I’m looking forward to new beginnings, just really new beginnings for me. I feel like a different person now. I started the year with so much hope and so much positivity. So I hope that follows through ‘til the end the year.”