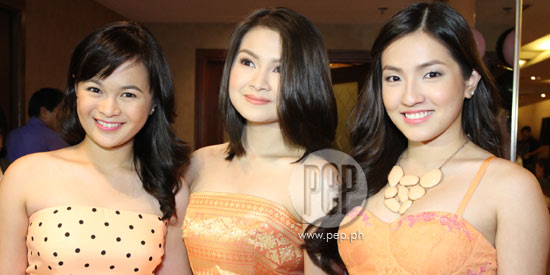 These three young actresses will reprise the roles of former teen stars Antoinette Taus, Sunshine Dizon, and Kim delos Santos, respectively, in of one of the popular local teleseryes in the ‘90s.

Barbie, Joyce and Krystal admit that they were not able to watch the original series. However, they are aware that they have big shoes to fill in GMA-7's remake.

On the other hand, Barbie, the more senior among the three young celebrities when it comes to acting, is more excited than nervous about their new TV project.

In the 2013 version of Anna Karenina, Donya Carmela (Sandy Andolong) will post a 10 million peso reward for whoever finds her granddaughter, Anna Karenina Monteclaro.

Hundreds of 15-year-old girls will claim the identity of Anna Karenina but most of them are fake; except for the three girls who showed authentic birth certificates and other proof—all three girls bear the same name yet they have different motives.