Julia Barretto says Cofradia was replaced because of complaints about racism 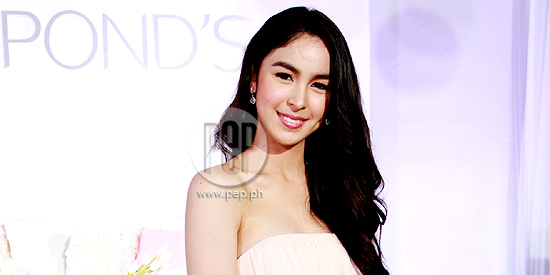 Julia Barretto was supposed to star in ABS-CBN's remake of Cofradia but the project was replaced with the original series Mira Bella.

Julia Barretto, whose career only kicked off at the beginning of the year, already has everything going for her.

The 16-year-old, a newly launched talent of Star Magic, is already a magazine cover girl and a facial product endorser with her own teleserye project underway.

While she has appeared on TV commercials as a child, Julia’s latest feat came with a trip to Thailand and Korea, where she shot two separate TVCs.

“Parang ang saya na you get to work pero travel at the same time!

COFRADIA TO MIRA BELLA. Last May, ABS-CBN announced that its upcoming teleserye, Cofradia, a remake of the 1953 Gloria Romero-starrer, will be topbilled by Julia.

Later in July, the Kapamilya network revealed that Julia will no longer be doing Cofradia but instead the teleserye Mira Bella.

At the August 5 press launch, Julia explained that the change in the project was due to the negative comments that the remake got from viewers. Some deemed the story to be racist.

In Cofradia, the heroine possesses a dark complexion which often subjects her to humiliation and mockery by those around her. She is transformed into a maiden of fairer skin with her lighting of a magical candle.

“ABS-CBN and Dreamscape, they really listened sa audience, sa viewers, and everybody so they decided… na gawin na lang [na] Mira Bella with an original story.”

Asked how she feels about being groomed by her home network to be the next young superstar, Julia said, “Sobrang nagpapasalamat.

PITTED AGAINST KATHRYN BERNARDO? Julia’s fast-rising career is said to be catching up with that of ABS-CBN’s young actress Kathryn Bernardo, also of the popular Kathryn-Daniel Padilla loveteam or “KathNiel.”

How does Julia feel about being matched up against Kathyrn?

Such rivalry, according to Julia, should not be given attention because she has her own career going for her.

“You have work, you have so many things around you. There’s so many better things to focus on,” Julia reasoned.

“I’m very open naman to be close to her or to anybody. I love meeting new friends and new people.”

On the other hand, does Julia see herself being paired with teen heartthrob Daniel?

“With anyone. Okay ako with anyone,” stressed Julia, adding that she finds the tandem “nice and very mabait.”

Should the solid “KathNiel” fans take it against her, would she still take on a possible project with Daniel?

Julia replied, ending the topic, “I’m open with anyone.”

DATING JULIAN ESTRADA? During the interview, Julia relayed that Julian Estrada, also a new talent of Star Magic with whom Julia is rumored to be going out with, is only a good friend of hers.

While open to entertaining suitors or “panliligaw,” Julia said that her focus right now is on work.

Julian, the son of Senator Jinggoy Estada and grandson of Manila mayor Joseph Estrada, is among her closest guy friends.

“We’re just hanging out! It’s nice to… parang despite the busy schedule… parang it’s nice to hang out and do the things we used to do before being launched.

Her mother, former actress-politician Marjorie Barretto, is one to discourage her to get into a relationship—“Wag na muna.”

“Pero yung panliligaw, like what I said, okay lang siya.

BARRETTOS’S QUARREL. Meanwhile, Julia kept mum when asked about the ongoing feud among her mother and aunts Gretchen and Claudine Barretto.

“I’m okay with everyone!” she said with a smile plastered on her face.

“We’re all gonna be okay!” she said lastly.