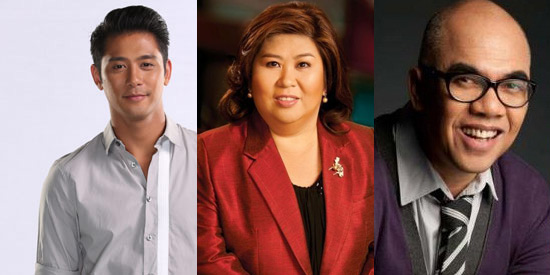 Outstanding works in the fields of print, radio, film, and television were recognized during the 35th Catholic Mass Media Awards (CMMA) held last November 15 at the GSIS Theater in Pasay City.

Established in 1978, the CMMA aims to instill a sense of responsibility among communicators. This award-giving body pays tribute to “media products that enhance the human development of the Filipino audience through competent and professional use of media techniques.”

Among those who attended this year's awarding ceremony were Rocco Nacino, Jose Mari Chan, Gloc-9, and Denise Barbacena.

ABS-CBN Creative Communications Management was cited in the Best Public Service Radio Ad award for conceptualizing and producing the radio promo “DZMM Bantay Lakbay” that aired during the Holy Week in 2012.

Star Cinema’s 2013 blockbuster film It Takes a Man and a Woman, starring John Lloyd Cruz and Sarah Geronimo, was awarded the Students’ Choice for Best Film.

A special citation went to Flames of Love also for the category Student's Choice Award for Best Film.

Here is the list of winners of the 35th Catholic Mass Media Awards:

Best News Program - State of the Nation with Jessica Soho

The Law of the Heart is Love (DWBR 104.3 FM / Philippine Broadcasting Service)

It Takes a Man and a Woman (Star Cinema)