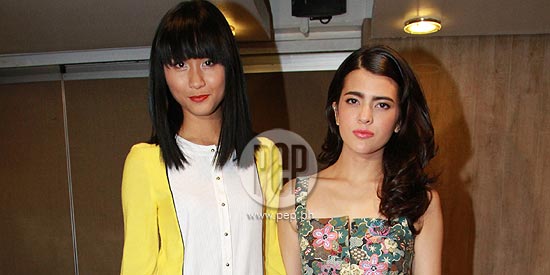 Katarina "Kat" Rodriguez (left) and Jodilly "Jody" Pendre are the two Filipina beauties who made the cut in Asia's Next Top Model. They will compete against fourteen other contestants in this reality show that will air on TV5 starting January 16, 2014.

Two Pinays are competing for the grand prize in Asia’s Next Top Model Cycle 2.

Jodilly “Jody” Pendre and Katarina “Kat” Rodriguez are two of the sixteen ladies who will compete in Asia’s Next Top Model, which is slated to air starting January 16.

Will these two Filipinas stand out from the other Asian girls aspiring for the title? PEP.ph (Philippine Entertainment Portal) had a chance to interview Jody and Kat yesterday, January 14, at Conti’s Restaurant, Greenbelt 2, Makati City.


The two Pinay contestants opened up regarding their reasons for joining ANTM.

Jodilly “Jody” Pendre is a 20-year-old graduate of the University of Santo Tomas. She admitted that she didn’t like modeling at all and she was forced only to do it to support her studies. She candidly revealed: “I was forced to model, to enter the modeling industry to support my studies because I really, really want to finish my studies.”

Jody recalled a sad event that turned her life around. “My father died before I graduated college, so I was forced.

“When I was in high school, I used to play volleyball for Philippine Team; we used to train in UST kaya sa UST ako nag try.”

She went through a lot just to finish her studies. “I graduated high school with flying colors that’s why I used that to have the academic scholarship.

Jody experienced a lot of hardships and struggles in life but she takes pride in the fact that she supported herself in order to finish her studies.

The other representative of the Philippines in ANTM is Filipino-American Kat Rodriguez. She is a free-spirited girl who explored modeling the moment she turned 21 years old.


Kat is currently studying at De la Salle University where she is taking up a double major in Philosophy and Business Management. She is a part of the university’s track and field team.

She pointed out, “Unlike Jodilly, prior Asia’s Next Top Model, my priorities were really school and my sport.

“What I was doing everyday was training, school, training and yoga. I try to practice every day if I can.”

Kat said that joining Asia’s Next Top Model was never her plan. “I joined the show because deep down, of course, I always wanted to try and go for it but I never had the support, the tools or the resources to really become a model.

“I always get shy because I am still studying, I am a runner and there are a lot of things going on but for my 21st birthday, my barkada pushed me to audition, so I auditioned and actually got in.”

Learn more about Jody and Kat as they compete against fourteen other aspiring models in the second season of Asia’s Next Top Model.

Witness how these two Filipina beauties stood out in the competition. Did they have a game plan? Did they hate or love each other? Learn more about them as TV5 airs Asia’s Next Top Model every Thursday night starting January 16.