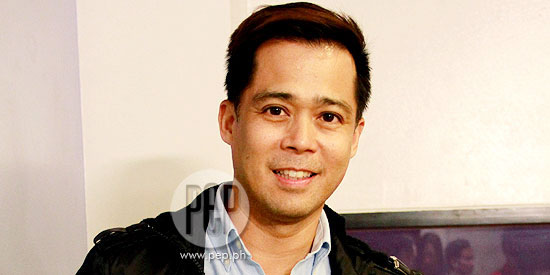 OPM singer-songwriter Dingdong Avanzado is cast as a popular jingle composer named Julio Medina in the upcoming TV5 musical-drama, Trenderas. Dingdong's character figures in a love triangle with Sheryl Cruz and Tina Paner. The 45-year-old singer says that he has high hopes for Trenderas: “I’ve always believed that something like this can work. Kasi may mga nagsasabing ‘Musicals here will not work.’ How ca

Dingdong Avanzado, despite the countless times he has performed before an audience, has not quite conquered the jitters he gets prior to getting up on stage.

This 2014, however, the OPM singer who became popular via his smash hits “Tatlong Beinte Singko,” “Ikaw Lamang,” and “Maghihintay Sa’Yo,” shifts from the concert scene to taping sequences for a teleserye.

In a story conference held January 18, Saturday, at the TV5 Media Center in Mandaluyong, the ‘90s “Original Prince of Pop,” was among the artists announced to star in the upcoming TV5 musical-drama Trenderas.

The idea of performing, this time before the camera, causes Dingdong to feel a different kind of uneasiness considering Trenderas is his first teleserye stint. On the one hand, the project being a musical-drama, excites him too.

The singer remarks with a wide smile, “Honestly, I’m very excited and I’m very honored na napili ako ng TV5 to do this and I know this is something na, alam ko, pinaghahandaan nila, e.

“And I’m glad nagtiwala sila sa akin. I want to live up to their belief in me.

Trenderas, slated to air in March, depicts the journey of three musically-inclined young women from living an impoverished life to becoming popular singers catapulted to fame by YouTube.

In the story, Dingdong portrays Julio Medina, a successful jingle composer and the long lost father of Lara (Lara Maigue), one of the three “trenderas.”

He also figures in a love triangle between actress Sheryl Cruz’s character, Diane, and Veronica, played by actress Tina Paner.

Trenderas is topbilled by Superstar Nora Aunor who is cast as Celina Palomar, a famous singer who mysteriously disappeared at the height of her popularity.

“WHEN ACTING, DON’T ACT.” Dingdong barely recalls the last time he seriously acted before the camera. He supposes it was two years back when he lent support to actor Nanding Josef in the Maalaala Mo Kaya episode, “Lolo Jessie.”

That his scenes in MMK, wherein he starred as the nephew of Lolo Jessie, did not require him to tear up, was a relief for Dingdong.

He finds comfort in the fact that Trenderas is a non-tear jerker that will showcase his singing skills above all.

He expects to draw motivation from his peers—veteran actors Rex Cortez and Leo Martinez, who are also part of the cast.

He eagerly adds, “And during my off time, I wanna do some workshop also para me-enhance pa!”

Dingdong, of course, gets inspiration from his wife, actress/singer Jessa Zaragoza, whom he says gave him important advice: "The first tip that she tells me is when you’re acting, do not act.

“You play the role, but don’t act.

“But as I get the script, as I delve into the character more, siguro I’ll be more at ease saka mas confident pa ako sa dapat kong gawin.”

MUSICAL RACE. Aside from performing in his first teleserye, Dingdong looks forward to working with Sheryl and Tina, whom he had performed with years back. He admits that it’s good to have familiar faces on board.

On the one hand, Dingdong is also happy to be in Trenderas with the new talents Isabella, Lara, and Katrina (a.k.a. Suklay Diva of YouTube fame).

He happily relays, “Imagine, after all these years, ngayon lang that I got in to something like this.”

Starring in a TV musical is something that Dingdong has always wanted to do.

“I’ve always believed that something like this can work. Kasi may mga nagsasabing ‘Musicals here will not work.’

“How can that be? We’re a musical race!

“So, we just have to live up to the expectations of the people and we’re hoping na yun ang ma-achieve namin dito,” he says with conviction.