Bianca King stars in TV5's Obsession, which tests boundaries of love and sanity 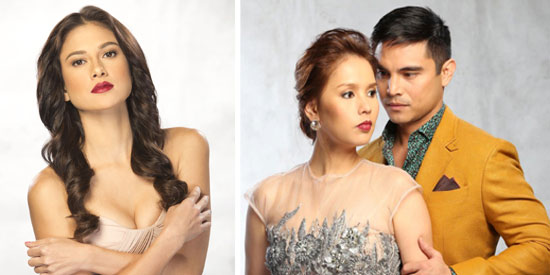 Obsession—starring (L-R) Bianca King, Neri Naig, and Marvin Agustin—is a psycho-drama that depicts love, revenge, and how too much of both can go against the limits of human sanity.

Are you willing to change your appearance for love?

This was the question posed to cast members of TV5’s new drama series, Obsession, during its January 17 press conference.

Marvin Agustin, who is cast as a cosmetic surgeon named Ramon, said, “Siguro ‘yong character ko talaga will do something like that. But in real life, parang hindi siguro.”

Lead actress Bianca King, who will act as Vanessa, never considered changing anything in her appearance in the name of love. She reasoned out, “Masaya na ako sa binigay sa akin ni God.

Meanwhile, Martin Escudero, who is cast as James, interestingly said yes, but not because of love.

THE PLOT. In TV5's upcoming primetime show, the main character of Obsession willingly undergoes extensive cosmetic surgery to make her former boyfriend fall in love with her again.


TV5’s psycho-drama series is about Bernadette (played by Neri Naig), a chemist in a successful beauty company that develops different vanity products.

Growing up in a world where she is always second-best, Bernadette became highly insecure and unhappy about herself.

Her relationships were short-lived because of her tendency to be possessive.

This changed when she met James (Martin Escudero), a playboy who made Bernadette fall for him. Bernadette became obsessively in-love with James, which caused their eventual breakup.

He offers Bernadette a chance for a new life by taking part in his company's experimental procedure, which involves changing her face and identity.

Various psychological and emotional therapies were done to prepare Bernadette for the actual surgery. Bernadette becomes Vanessa, who is determined to seek revenge by making James fall in love with her again.

But as Vanessa gets absorbed in her manipulative schemes, Ramon also becomes obsessively in-love with his creation and is willing to move heaven and earth just to satisfy his obsession.

Will Bernadette be successful in her plans to make James fall in love with her again? Or is it Ramon who will capture the heart of his muse, Vanessa?

In a twisted story of love and deceit, who will win in a game where people are not what they seem?

Completing the cast are Elizabeth Oropesa who will portray Regina, a surgeon and the patronizing mother of Ramon; and Maureen Mauricio as Eliza, the overprotective mother of Bernadette who is willing to give up her career to take care of her child.

Obsession is another one-hour weekly drama offering of TV5 that will be shown every Thursday at 8 p.m. starting January 23.