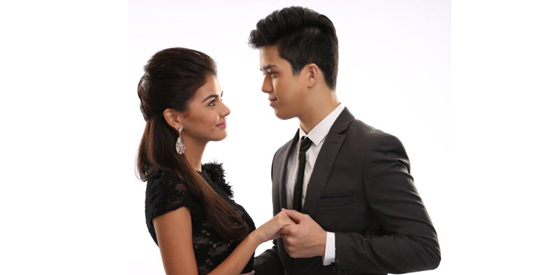 Since November 2013, viewers were captivated by GMA Network’s afternoon drama series Villa Quintana topbilled by Kapuso teen heartthrob Elmo Magalona and promising Kapuso actress Janine Gutierrez. The series reaffirmed that their first team-up on-screen is one of the year's most exciting casting coups.

They breathed life to the characters of Isagani Samonte and Lynette Quintana, and they retold a great love story in a way that best represents how sweet young love can be. Women, young and old, definitely fell in love with the story’s triumphant celebration of love amidst challenges.

And as Villa Quintana wraps up its 7-month run, Elmo and Janine have all good things to remember as well as lessons learned while doing Villa Quintana. "The whole show was unforgettable for me because it was a dream come true. It was full of firsts and the entire series was a new experience. I learned to really study the character and to always give your best when you have scenes,” said Janine.

Same goes with Elmo, he said that he has favorite scenes with each cast like Raymart Santiago, Sunshine Dizon, and Paolo Contis. But one of his unforgettable scenes was with Janine. “May isang beses na iniwan kami ni Janine ng lahat sa eksena, tapos naghihintay lang kami matapos yung eksena ng magkaakap,” shared Elmo. He also added that when it comes to lessons learned, “walang makakahadlang sa pusong naninindigan.”

Villa Quintana is not only an acting piece for the team up of Elmo and Janine but also the show’s love triangle of bankable stars Raymart Santiago as Felix Samonte who stood as the father of Isagani when Robert abandoned Lumeng; Sunshine Dizon as Lumeng Samonte, the mother of Isagani, her first love was Robert but she eventually married Felix; and Paolo Contis as Robert Quintana, the only son of Don Manolo and the real father of Isagani. The show did not only tackle love but also family values, relationships and principles worth fighting for as strongly depicted by the characters of Raymart, Sunshine, and Paolo.

As the series ends this Friday, find out if there will still be peace among the Samontes and the Quintanas? Will Felix be able to protect his family? Can Lumeng forgive and accept Robert after everything that has happened between them and their families? Will Isagani and Lynette’s love for each other prevail or will their past still be a hindrance to them?