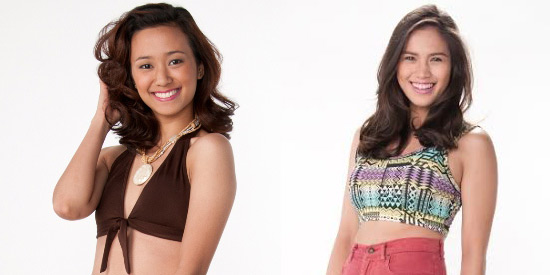 Jayme Jalandoni (left) and Michele Gumabao (right) both cried while considering to pose nude for a challenge posed to them for Pinoy Big Brother All In.

Senator Pia Cayetano says Pinoy Big Brother All In “crossed the line” when Kuya urged a female housemate to pose for a nude painting.

The producers of PBB All In “should give a public explanation and apologize for that unwarranted challenge," said Senator Cayetano in a statement earlier this week.

Meanwhile, Senator Nancy Binay plans to file a resolution on the issue within the week.

“How far can reality TV go for high ratings? Will we allow the network to exploit our women and children for ratings sake?" asked Senator Binay in her own statement.

The controversy stemmed from the fact that Big Brother challenged 23-year-old Jayme Jalandoni to pose nude for a painting as part of their weekly task.

However, she changed her mind and Big Brother told her that she will have to pick three other housemates who join her in serving as nude models.

Before making the final decision, Jayme had the chance to hear a recorded message from her father about saying no.

Jayme, who is vocal about being a devoted Christian, finally backed out from the nude painting challenge as did the three other housemates.

SENATOR PIA “DISMAYED” BY PBB ALL IN. Senator Cayetano, the Chairperson of the Senate Committee on Women, Family Relations and Gender Relations, strongly denounced the nude painting challenge of PBB All In.

“I am dismayed that one of the challenges was for the female housemates to pose nude. This is an assault to the dignity of the women housemates. Asking a woman to consider posing nude in such a situation – where her acceptance to perform the challenge is made in exchange for points or benefits for herself or her housemates – is tantamount to coercion,” she stated.

The senator, who is also the principal author of the Magna Carta of Women (Republic Act 9710), also said that the reality show already committed a violation even though the nude painting session did not push through.

"I agree with the position of the Philippine Commission on Women, which first raised this issue, that there is nothing wrong about women who pose nude for art, as long as the decision is voluntary. Clearly this was not the case with housemate Jayme Jalandoni, who was under pressure to follow the instructions of Kuya in order not to be meted sanctions. To make things worse, the bargaining between Jayme and Kuya happened on national television in full view of the public.

"We must take note that aside from Jayme, another female housemate, Michelle Gumabao was also forced into accepting the nude painting challenge. Even if their team eventually backed out, the violation had been done."

Senator Cayetano then instructed them by saying, "PBB producers should take note of the Magna Carta of Women (Sec.19, Implementing Rules and Regulations) which encourages the non-derogatory portrayal of women in media. The program's producers need not wait for the Movie and Television Review and Classification Board (MTRCB) to take action. It should give a public explanation and apologize for that unwarranted challenge."

SENATOR NANCY URGES PBB TO BE MORE SENSITIVE. Earlier this week, Senator Nancy Binay urged the MTRCB to review PBB's rule book and the Code of Conduct and the Ethical Standards that govern the Endemol franchise.

"This might be a reality show but its contestants, especially its female housemates, should be accorded with respect without compromising their dignity and their rights as women," Binay said in her statement.

“I believe this is the second time PBB went overboard. How far can reality TV go for high ratings? Will we allow the network to exploit our women and children for ratings sake?

The senator believes that management and the whole production team are accountable for the controversy that happened.

"All the tasks and challenges are part of the script which are approved by the PBB Management prior to execution. The responsibility does not solely fall on Kuya's lap--kasama sa daloy ng script ang management at buong production team.”

MANDATORY CONFERENCE FOR PBB ALL IN. In response, the MTRCB summoned ABS-CBN regarding the controversial nude painting challenge.

In a statement sent to PEP.ph, ABS-CBN’s spokesperson Bong Osorio said: “We have received the invitation from MTRCB. We will cooperate and attend the conference on June 11.”

In its Twitter account, the MTRCB shared a photo of the ABS-CBN officers and PBB team members who attended the mandatory conference held earlier today, June 11.