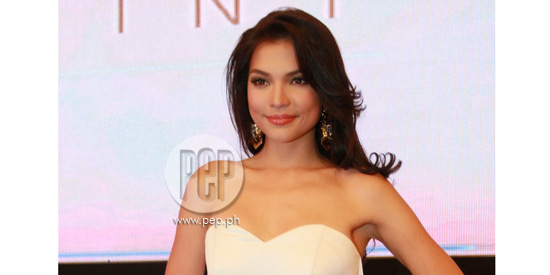 
"While growing up, my best friend got leukemia so we talked about it. Basically, I asked him the thoughts that were going through his mind, how he felt at certain times, at certain stages," ani Rhian.

"The second I got this role, I talked to him and asked, 'Is it okay if I talk to you about the experience?' I need to be specific. I want to be realistic about this role. I want to give our audience truth."

DEGLAMOURIZED RHIAN. What made Rhian accept the new series and the role assigned to her?
"It's not even a question of accepting," mabilis na sagot ng aktres.
"Ive been asking for a role where I would have to be deglamourized and look different, which will happen in the middle of the show."
Deglamourized ang itsura ni Rhian dahil magkakaroon ang karakter niya ng terminal disease na leukemia.
"Yeah, and I've been asking for a role also na... ano'ng tawag dito? It's just, I wanted it to be more about the acting.
"Because I've been doing, for the longest time, in every show I"ll play someone whose life revolves around the guy.
"It's usually like that naman, e. We love our love stories, everything.
"So I wanted a role na her life doesn't revolve around the guy," sambit ni Rhian.

FINDING TRUE SELF. Nakita raw ni Rhian ang sarili sa role o character na ginagampanan.
So much Joy in Rhian, and vice-versa.
"She [referring to Joy] is so much like my character in the sense that she's bursting with energy all the time!" tuwang-tuwang lahad pa ng Kapuso actress.
"She's sobrang pilya and I'm like that, too! Really, really makulit, playful...
"Ayun, she's the kind of person na she always wants everyone around her to be happy.
"So, everytime something happens, she tends to play jokes on everyone.
"That's the kind of person she is. That's also how I tend to handle conflict, like, I will always break loose and make the situation seem light."
In contrast, mas heavy ang mga dramatic scenes na nagawa niya sa dalawang serye na tinampukan, na parehong dinirek ni Bb. Joyce Bernal.
"This is my third time with Direk Joyce.
"I'm working with Carla and Tom for the first time... oh, and Sid!"
Parang totoong pamilya naman daw sila nina Carla and for their parents, LT and Al Tantay.
"Because everyone in the family get along together so well.
"So, in our scenes together, pag kumakain kami, sa dinner table, it ends up being kind of effortless dahil nagkukulitan kami."
SERIOUS ACTING. Meanwhile, Rhian is bent on getting serious with her acting craft.
"Especially with this show [My Destiny]... I have to focus and I plan on really, really killing my social life for a long time.
"For three months, maybe; just for the duration of the show, because I have to be in isolation, for me to be able to focus on this role.
First time kasing gumaganap si Rhian sa papel ng isang babaeng terminally ill.
"It's so complex and I'm planning to change what I look like.
"I also don't wanna be around all my friends who's gonna be eating and drinking and stuff like that.
"I have to focus," diin pa ni Rhian.
Hindi naman daw nangangahulugan na ngayon pa lamang nagma-mature si Rhian, as a person.
"I don't know," sabi niya. "I think I've already matured a lot in terms of the way I think.
"Though I never ever want to lose the child in me. I don' think that will ever go away and I don't want it to happen.
"I'm always very playful about the things [that I value] and I'd like to keep it that way.
"It keeps me sane."
Ang mahalaga, nagkaroon ng awareness si Rhian sa totoong kahulugan ng sining ng pagganap na kanyang gawain.
"I'm really, really, really taking this role seriously because... ah, I've noticed, everytime I see a show, the way it's being done here, everything is glamorous, no matter what."

INTERNALIZING HER CHARACTER. Bilang halimbawa, Rhian cited, "Oh, nasagasaan ng kotse si ganyan... tapos, pagtingin mo, naka-[eye] lashes!
"Alam mo yun? So, I really want it to be realistic.
"I want it to look the way Hollywood does it, you know, when they have a role, they become the person.
"And I think this country needs that, too.
"Parang, we deserve the kind of effort put into our own entertainment.
"So, that's what I wanna do.
"And whenever I am with Direk Joyce [Bernal] and my acting coach, Jay, we do nothing but talk about my character and really dig deep!
"Because there are some things you really never find in the script.
"And you have to create memories for it to feel real."
Applicable daw ito lalo sa ginagampanan nilang papel ni Carla, bilang siblings.
"Ah, like you know, we have to think, 'Ah, naku, dati, nung malapit na akong mahuli ng teacher namin sa school... [mabuti] pinagtakpan ako ni Carla!' parang gano'n.
So she is creating memories to form a bond as her way of internalizing her role?
"Right," Rhian agreed. "So we do nothing but talk about these.
"And I'm preparing physically also for it... because I wanna make some physical changes to that role," pagtatapos ni Rhian.