PBB OTSO UPDATE: Get a sneak peek of 2nd batch of teen housemates 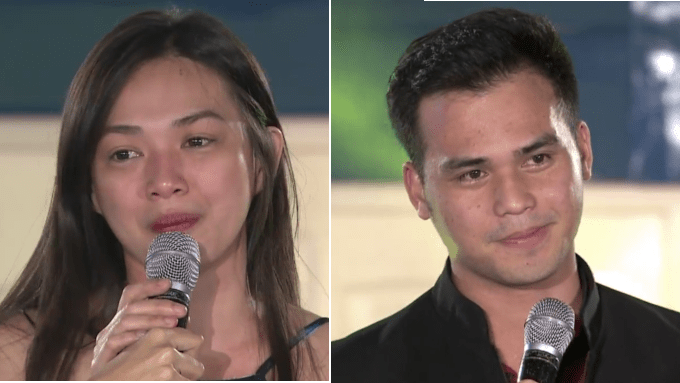 Camille Sandel (left) and Kim Franco are the latest evictees of PBB Otso.

The first victim of the double eviction was Camille Sandel, a 23-year-old aspiring model from Pampanga. The second evictee was Kim Franco, a 23-year-old broadcaster from Davao.

Both Camille and Kim’s evictions were not surprising as they spent most of their time in this batch in Camp Star Hunt. They only entered the main house two weeks ago.

The other nominees, meanwhile, were in the house longer. Fumiya Sankai was one of the original housemates, so it was not a shock that he got 87.5% of the total public votes.

Thea Rizaldo and Shawntel Cruz, meanwhile, entered the house three weeks ago. They got 5.33% and 4.52% of the votes, respectively.

Lastly, Camille received 1.6% of the votes and Kim only got 1.05%. The two simply did not have enough time to build supporters, hence the low voting percentages.

HOW THEY WERE NOMINATED. The five nominees were automatically nominated after losing in the first two stages of the Big Jump to the Big Four challenge.

The first stage of the challenge tasked the housemates to form a block puzzle on top of a table. They also had one opportunity to knock down the puzzle of their opponents.

The housemates had to pair up and battle house challengers from Camp Star Hunt. There were four rounds:

Only Fumiya and Yamyam lost to the house challengers in this round. Because of this loss, Fumiya decided to step down so Yamyam can continue. Fumiya was then placed in the list of nominees.

In the second stage, the housemates had to form a block tower puzzle on the floor using their feet. The three housemates with the fastest time in completing puzzle moved on to the last stage, and they were Yamyam, Lou and Andre.

Because Kim, Camille, Shawntel and Thea lost in the second stage, they were also added to the list of nominees.

In the last stage, Yamyam, Lou and Andre had to sit on a boat in the middle of the swimming pool. The boat had holes, and the three had to use makeshift containers to remove the water before the boat sinks. If the boat sinks, the housemate is eliminated.

Andre’s boat sank first. He said he had a difficult time because he is the heaviest among the competitors.

THE LAST WEEK. This batch of PBB Otso is now on its last week. The batch big four will be revealed next weekend, and the next batch of teen housemates will be introduced.

For the last week, the house challengers in Camp Star Hunt were given the opportunity to ask burning questions to the housemates. They have to come up with the most difficult questions, because they will win P40,000 if three housemates would refuse to answer any question.

Will the house challengers win, and can the housemates endure the interrogation? Viewers will find out this week.

TEEN HOUSEMATES BATCH 2. A teaser was shown to viewers, allowing them to get a brief glimpse of the second batch of teen housemates to enter PBB Otso.

On March 31, the 8 teenage boys and 8 teenage girls will be introduced and their story will start at an undisclosed island.