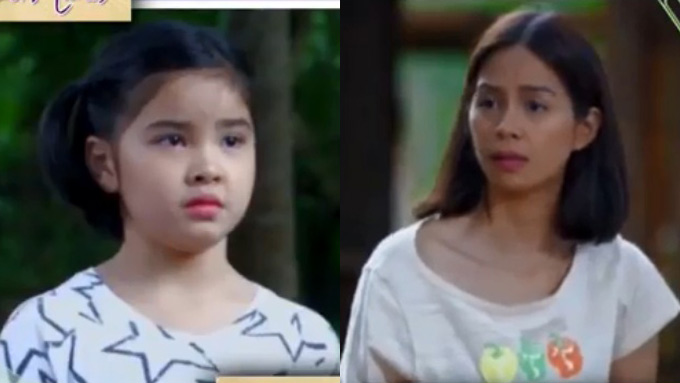 ABS-CBN has aired the new daytime series Nang Ngumiti Ang Langit, which revolves around a child who reminds viewers of the importance of forgiveness.

Last Monday, March 25, viewers had the chance to meet Mikmik (Sophia Reola), an enthusiastic girl who grows up with her loving mother Ella (Kaye Abad).

Their happy life will change when Ella finds out she has leukemia. In her pursuit to help her mother live, Mikmik learns about the truth that her mother is an illegitimate child of the Salvador clan, one of the wealthiest families in the country.

Mikmik tries to ask for help from Divina (Pilar Pilapil), the Salvador matriarch, but she will be turned down until Ella dies.

Mikmik then decides to live with the Salvadors in the hope of finding acceptance and the love she has received from her deceased mother.

But as soon as Mikmik steps in the house of the Salvadors, Divina and Katrina (Reyes) make Mikmik pay for the sins of her father, Michael (RK Bagatsing).

Michael is the son of their mortal enemy and was accused of killing Divina's son and Katrina's husband, Eric (Rafa Siguion-Reyna).

A flashback then showed the background of Ella’s life.

Ella used to live with her mother (Isay Alvarez) in the province. When Ella studied Medicine in college, she stayed with her rich long-lost father, Gabriel Salvador (Leo Rialp).

Ella had to reside in the Salvador household, together with her stepmother Divina (Pilar Pilapil), and her stepbrother, Eric (Rafa Siguion-Reyna).

Divina did not accept Ella as her own child, and did not allow her to call Gabriel as her father.

The Villaluna clan was also introduced, with David (Dante Rivero) as the patriarch, and Michael (RK Bagatsing) and James (Enzo Pineda) as his sons.

Back then, Michael was in a relationship with the gentle but ambitious Katrina (Cristine Reyes).

The Villaluna clan was embroiled in a rift with the Salvador clan because of an accident at a construction site.

During an inauguration event, Gabriel was killed by an unknown assailant. Divina blamed David for her husband’s death.

Amid all the incidents, Katrina asked Michael to marry her, but Michael was disappointed, knowing that Katrina only to reach her greatest ambition.

At a bar, Katrina followed Michael, who was with James, to ask for a second chance.

Eric entered the same bar and a brawl ensued when he saw James.

Ella bumped into Michael, starting a romance between them.

Eric also bumped into Katrina, who after a while, agreed to marry her.

Years later, Ella served as a maid at the Salvador household while taking care of Eric and Katrina’s kids.

Divina then found out about Ella and Michael’s secret relationship, causing the Salvador matriarch to throw Ella out of their house.

Michael brought Ella to their house.

Upon seeing Ella, David told her of his plan to use her against the Salvador clan.

Ella walked out on him, just as Eric arrived to fetch her. This led to a fight between Eric and Michael.

When James arrived, he grabbed a gun to threaten Eric.

Michael tried to stop them, but he accidentally pulled the trigger and shot Eric.

Future episodes will show Michael getting jailed, and Ella living with Mikmik in the province.

Ella gets diagnosed with leukemia and dies, forcing Mikmik to live in the Salvador household. Katrina makes it a point to torture the hapless young girl.

How did the pilot episode of Nang Ngumiti Ang Langit fare in the ratings game?

The new ABS-CBN daytime series registered a Kantar rating of 15.8%.

Its rival program in GMA-7, Hiram na Anak, registered a Kantar rating of 8.9%.

Yasmien Kurdi and Dion Ignacio's Kapuso series got a TV rating that is 6.9 points lower than its Kapamilya counterpart.