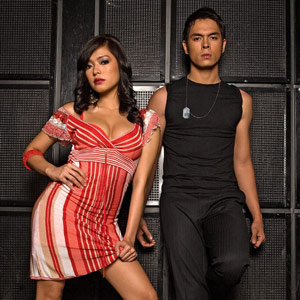 Jake Cuenca (right) and Bangs Garcia (left) and star in Palos, the remake of the movie that established Bernard Bonnin as action superstar in the ‘70s. Toto Natividad (the director of Jericho Rosales's Panday) directs the action sequences of Palos, which will air on ABS-CBN in 2008. His co-directors are Eric Salud and Trina Dayrit.


Come 2008, one of the hottest male stars in ABS-CBN, Jake Cuenca, will star in an action teleserye that pits him against Pinoy Mano-Mano host Cesar Montano, award-winning action star who started out in showbiz as a stunt man. Jake, who starred in the drama series Natutulog Ba ang Diyos, will heat up the TV screen with his new leading lady, Bangs Garcia.


Palos, one of the biggest budgeted and most talked about projects of ABS-CBN, will start showing in summer 2008. The Kapamilya network remakes the movie that made Bernard Bonnin an action superstar in the ‘70s.


The title Palos is the Tagalog word for "eel"—the snakelike fish that's quick, slick, and hard to capture. These qualities make for Jake's character: swift, smooth, versatile. Palos is based on the classic Filipino comics and film character of the same name, a professional thief who is adept in the fighting arts and possesses acrobatic skills. He's as slippery as an eel and as rarely caught.

The TV series is based on the Palos movies that were released from the 1960s to the 1980s. The character was created by Virgilio and Nestor Redondo and first introduced to the public in the Tagalog Klasiks comic-strip serial "Alyas Palos." Actor Bernard Bonnin played the character in all eight films, starting with Alyas Palos in 1961.


Jake's new leading lady is Valerie "Bangs" Garcia. She is the cute and charming star in Let's Go but now she returns with a new image. Sexy and aggressive, she is one of the much-awaited faces for the coming year. Don't miss the hot revelations of Jake and Bangs in Palos, directed by Toto Natividad, Erik Salud and Trina Dayrit..