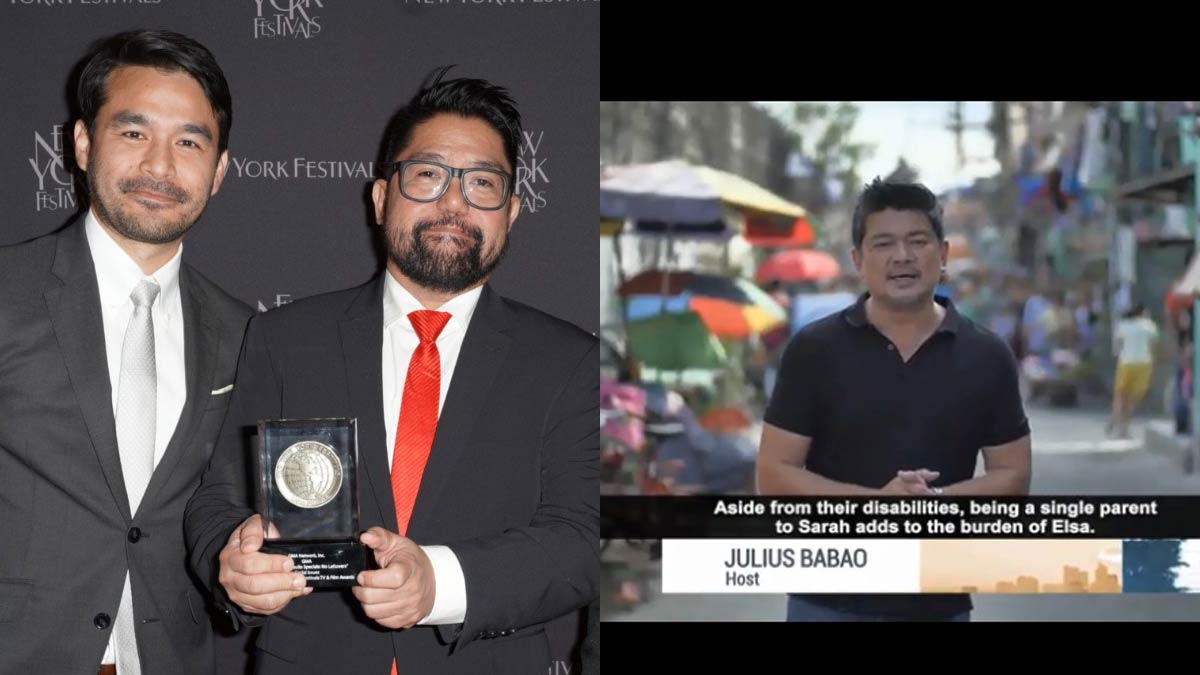 The shows of Atom Araullo (leftmost) and Julius Babao (right frame) were among the Filipino programs honored at the 2019 New York Festivals.
PHOTO/S: GMA-7 (Atom)

Meanwhile, ABS-CBN received one Gold World Medal, one Bronze World Medal, and a Finalist certificate in the awarding ceremony held on April 9, 2019 in Las Vegas.

The Kapamilya Network earned its Gold World Medal in the Station/Image Promotion category for its Mother’s Day TV spot “Elsa and Sarah.”

Created by ABS-CBN News, the TV spot featured the inspiring story of Elsa, a blind mother, and her daughter Sarah, who has Down syndrome. In spite of this, Elsa and Sarah survive each day by looking after each other. Navigating through life hand-in-hand: Elsa became the voice of Sarah, while Sarah became her eyes. Their story was first featured in TV show Mission Possible hosted by Julius Babao.

Also standing out among entries from all over the world in the Biography/Profiles category was the ABS-CBN DocuCentral documentary series Local Legends, which also won at the NYF in 2018. The program, which promotes love and appreciation for Philippine culture and heritage, won a Bronze World Medal this time for its episode “Karne Norte” about traditional corned beef makers in Masbate.

Anchor Julius Babao takes viewers for a day in the shoes of Elsa and Sarah Badilla, showing their dedication to each other, and their resilience despite their present conditions.

The monthly documentary program The Atom Araullo Specials was conferred the Silver World Medal in the Social Issues category for its “No Leftovers” episode. The winning piece showed that food wastage remains a big problem in the Philippines by tracing how food is wasted from
production to consumption.

Earning another Silver World Medal for the Philippines was the “Batang Maestro” episode of GMA News TV’s Reel Time, this time for the Heroes category. “Batang Maestro” featured the story of 12-year-old Dagul and his fellow volunteer ‘little teachers’ in the province of Sorsogon who cross
the river of Donsol on board a bamboo raft just to reach children in remote areas. Receiving the award for Reel Time was executive producer and writer Mark Norella.

Kapuso Mo, Jessica Soho (KMJS) was awarded the Bronze World Medal for its "Salay” feature in the Community Portraits category. The segment showed how students and teachers from Caraga, Davao Oriental risk their lives as they cross a river using an improvised cable car made from rattan called
"salay" just to go to school and buy basic needs.

The New York Festival’s "World’s Best TV & Films" competition honors programming in all lengths and forms from over 50 countries with categories that mirror today’s global trends, and encourage the next generation of storytellers and talent.

A jury of 186 media professionals around the world were chosen to judge the finalists.