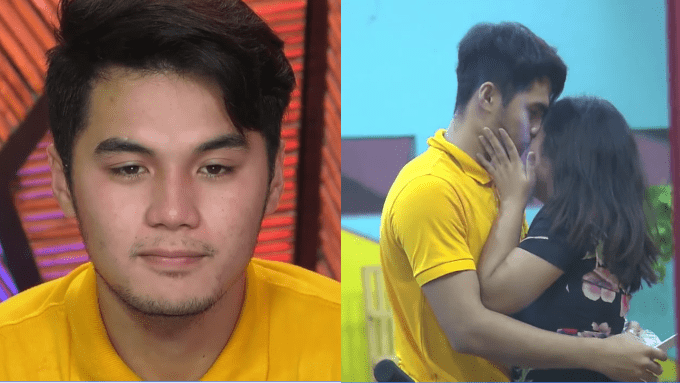 Emotions ran high on the latest episodes of Pinoy Big Brother Otso, after one housemate revealed a big secret. In a heartfelt conversation with Big Brother, Alfred Beruzil disclosed that his girlfriend is already five months pregnant.

Big Brother noticed that Alfred was affected by their weekly task, which was to take care of unique Easter eggs. Alfred admitted that it reminded him of a huge responsibility that he has to face when he exits the PBB house.

But he has learned to be strong for his new child. He began working hard in odd jobs like being a delivery man for an app.

The other housemates noticed tears in Alfred’s eyes when he exited the confession room. Shoichi Oka cried when he saw his friend, even if Alfred was not ready to tell him his secret.

After lunch, Alfred gathered the other teen housemates and tried to give them clues. Angela Tungol was able to guess correctly by asking, “Are you a daddy?”

The housemates consoled their friend and offered to help him when Big Brother gave him a special task due to his situation.

The task was for Alfred to carry eight items from one end of the activity area to the other end. The items must be carried using a makeshift delivery truck costume, while Alfred walks around a course. One lap in the course is equal to one kilometer.

Little did Alfred know that the reward for the task is for him to see his girfriend.

Shoichi and Mich Wunder were able to help Alfred carry the first items: a whole case of softdrinks for 40 kilometers, 18 liters of water for 15 kilometers, and a letter for 58 kilometers.

Shoichi noticed that Alfred showed signs of fatigue halfway through the task. “When I asked him ok lang, he said ok lang pero his voice parang napagod na,” narrated the Japanese housemate.

Big Brother, however, made the task harder by disallowing further help. Alfred’s spirits were lifted, however, when he saw that the next items were related to maternity: baby bottles and clothing for 16 kilometers, and a baby crib for the same distance.
As Alfred was about to finish the last item, he saw his girfriend, Rose Ann Bataller, enter the activity area. He was excited and immediately hugged his partner.

Rose told him that she is sad most of the time because she missed him. Alfred reassured her and told her to wait.