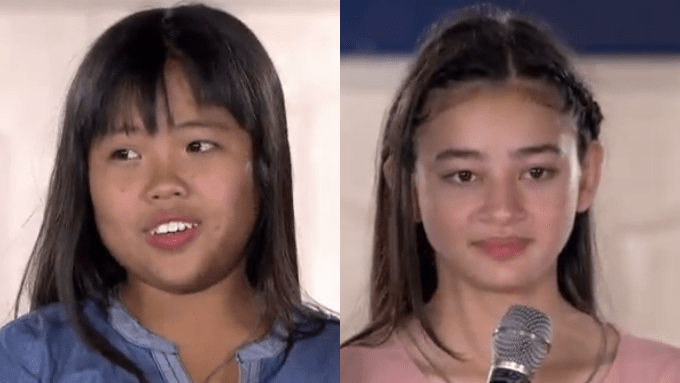 The first evictees of the third batch of Pinoy Big Brother Otso were revealed on April 28, 2019. They are Narcy Esguerra and Shami Baltazar, who both exited the house after about a month in the ABS-CBN reality show.

Both ex-housemates received the lowest percentage of SMS votes from the viewers, against six other nominees. The other nominees were Mich Wunder, Gwen Apuli, Sheena Catacutan, Shoichi Oka, Tan Roncal, and Yen Quirante.

Narcy and Shami weren’t able to start as official teen housemates. They initially stayed in Camp Star Hunt for a week before they were able to cross over to the main PBB house.

The 13-year-old Narcy was the youngest housemates in their batch. The young singer from Laguna generally has a happy disposition, but her fellow housemates noticed that her many insecurities about her looks made her have a negative energy in the house. For this reason, she was nominated for eviction by her fellow housemates during the first nomination night.

Shami, meanwhile, was nominated due to her actions during the Easter eggs weekly task. Each housemate were given an egg to take care of, but Shami didn’t seem to take her task seriously. When her egg broke slightly, she intentionally threw it to completely ruin it. For this reason, the 15-year-old Davao del Norte native got nominated by her fellow housemates.

OTHER PBB OTSO NOMINEES FOR EVICTION.

Among the other six nominees, only Mich got nominated in the traditional way. The 18-year-old hunk from Leyte received nomination points because other housemates found him to be rude and selfish when it comes to food.

Tan, Yen, Shoichi, Sheena and Gwen, on the other hand, were automatically nominated after they lost the Golden Circle challenges. These were different challenges throughout the week that allowed any housemate to save themself from being evicted.