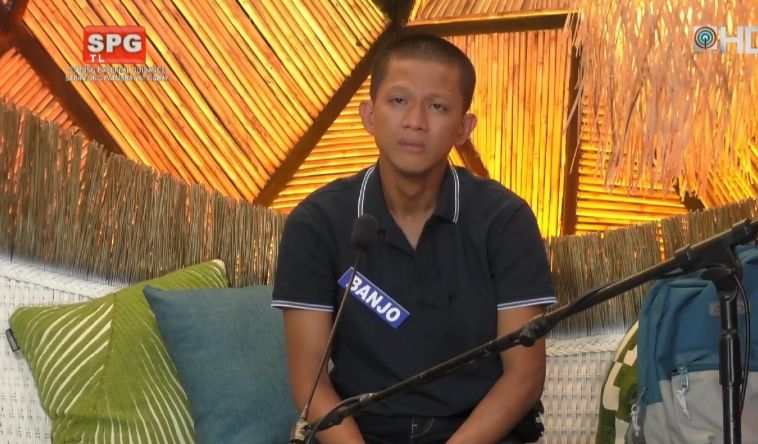 Banjo Dangalan has been removed from the Pinoy Big Brother Otso house. The Funny Fighter ng Quezon City was force evicted from the show after he joked about raping another PBB Otso housemate.

The incident happened while all the housemates were having breakfast. Banjo, who liked to crack jokes, started by talking about his sleeping situation with the boys.

There were limited beds in the boys room, so the housemates had to shared beds. Banjo slept with Akie Poblete, Gino Roque slept with Sky Quizon, and Wealand Ferrer slept with Argel Saycon.

On the dining table, Banjo questioned why Akie does not cuddle with him. The 27-year-old martial arts trainer moaned that the Gino-Sky and Wealand-Argel pairs hugged each other while sleeping, so he’s bummed that Akie does not do the same.

Akie replied that he’s just not used to it. “Hindi ako sanay,” said the 24-year-old dancer from Italy.

Then Banjo set his sights on another male housemate. He told Gino Roque, a 23-year-old businessman from Quezon City, that they should sleep together instead. Banjo proposed to switch beds with Sky so he can sexually harass Gino.

Banjo then mimed how Gino would look tired and out of breath after he’s done with him.

Gino appeared to brush off the lewd joke by laughing, but the girls on the table appeared to look uncomfortable. Diana Mackie and Jamie Salenga were not laughing and looked dismayed by what they were hearing.

Big Brother viewed this incident seriously because it was only one instance of Banjo’s continued crude actions in the house. He was already warned from being vulgar, or being bastos, the night before he cracked his bad jokes over breakfast, but Banjo did not curb his behavior.

The initial warning had to do with Banjo’s habit of touching and smelling the hair of female housemates. This started on May 31.

When Sky asked Banjo why he was doing this, he replied that the scent of a woman’s hair makes him feel weak. He even wants to sleep while a woman’s hair is on his face.

The women initially thought Banjo was not serious, so they let him touch and smell their hair. Diana even joked back that Banjo should perhaps wear a wig so he can smell hair any time.

As the day went on, however, the girls started to feel uncomfortable. For example, Franki kept giving Banjo side eyes whenever he touched her hair and put it closer to his nose.

In a conversation with Sky and Kiara Takahashi, Jamie said Banjo’s behavior was alarming. Sky said he also said that he already told Banjo to avoid touching any woman’s hair without any permission. “Kailangan merong permission,” said Sky.

Kiara confirmed that Banjo did ask her if he can smell her hair.

But Big Brother did not approve of Banjo’s actions just the same, even if he was already asking for consent. That night, Kuya called Banjo to the confession room to warn him that he should stop his crude actions or he will face sanctions.

Banjo agreed, and he immediately gathered the girls to apologize after he got out of the confession room.

After the breakfast incident, Diana, Jamie and Franki went to the pool area to talk about what happened. They said Banjo made them feel uncomfortable.

Franki said she was relieved because she thought she was alone with this concern. “I thought I was being hypersensitive.”

Jamie added that she had felt bad vibes about Banjo even earlier. “If you’ve noticed I have not been okay lately. Really, even in the first week, I was not feeling well about this person and hindi ako mapalagay.”

The 27-year-old call center agent from Quezon City also thought Banjo might be capable of more worse actions, so she made sure to keep the other girls from him. Jamie said she always tagged along with Franki due to this. “I’m worried about you,” she told the 24-year-old model from New Zealand.

Later on, the three girls initiated a house meeting to talk to Banjo and the rest of the boys. They mentioned that they felt uncomfortable because of Banjo’s sex jokes.

Banjo was immediately apologetic for his behavior. He said sorry to the girls and to Gino.

Banjo’s apologies were not enough, however, because Big Brother called him into the confession room to announce the decision to remove him from the house.

Kuya mentioned that Banjo broke the rules on giving respect to his fellow housemates.

Banjo was in tears as he exited the confession room. He apologized once again while packing his stuff and he exited the house after several tearful goodbyes with his fellow housemates.