Singer Josephine "Banig" Roberto explains why she migrated to the U.S. 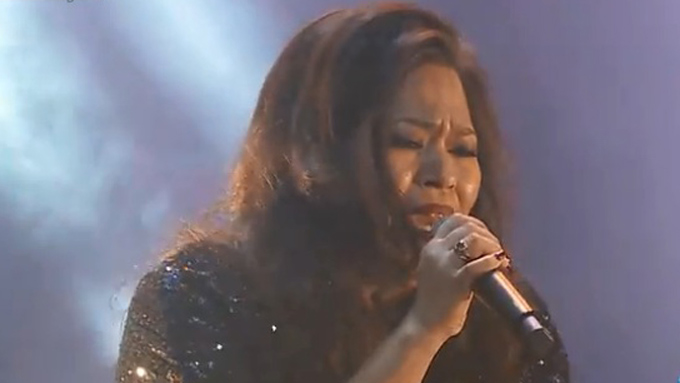 Find out why Josephine "Banig" Roberto of Ang Bagong Kampeon fame chose to leave Philippine showbiz and migrate to the U.S.

Josephine "Banig" Roberto had the chance to sing once again in front of her kababayans when she joined ABS-CBN stars who performed recently in the United States.

Banig was one of the performers of the ASAP Natin 'To Bay Area show held in San Jose, California last August 3.

The Filipino singer gained fame in the past for singing Whitney Houston songs and placing third in the 1986 televised singing competition Ang Bagong Kampeon.

"I was the youngest finalist winner for 7 consecutive weeks," she said on ASAP Natin 'To.

She then explained that she chose to transfer to the U.S. when she won an international TV competition in 1989.

"When I was 10, I joined International Star Search, and since then nagtuloy-tuloy na and that’s the reason why nag-migrate kami dito sa Amerika."

In the late 80s, Banig impressed American audiences and appeared in American TV programs such as the Arsenio Hall Show and Good Day L.A. She is now a music producer.

Banig paid tribute to Gary Valenciano by posting her throwback picture with Mr. Pure Energy. She greeted Gary for his birthday last August 6 by posting their black-and-white photo with this caption:

"Happy Birthday to the man who gave me my first shot on the concert stage. This was my first pictorial for my first concert as an opening act for the Love Power concert at the Luneta Granstand. To date, you are still the best Filipino artist ever. No one can even compare. You were definitely my training ground. I was 9 years old touring and training from the best! I am so happy that after 30 long years, I got a chance to spend some time with you and Tita Angeli this weekend...even for just a little bit. My whole family and I wish you the best on your birthday! Cheers to good health, happiness, love and MUSIC! We love you Tito Gary!"

Banig also posted a throwback photo of her with Gary V and Regine Velasquez with the caption:

"It’s not Thursday but What A Throwback!!! My first major concert in the Philippines was at Luneta Grandstand and I opened for Tito Gary’s Love Power and performed with Ate Regine then. We didn’t age at all right??"

In her Instagram account, Banig also shared a photo of her onstage with Regine Velasquez. She wrote in the caption:

"I can’t even describe how much gratitude I have for the ASAP family for giving me the opportunity to sing with one of the country’s best...Ate Regine! Even for a just a short moment this was a dream come true. Though it’s been 3 decades since I’ve come to perform for my kababayans, please
know that you all still hold a special place in my [heart emoji]! You are HOME and it’s soooo humbling and touching that even after so many years, even for just the little time I spent in Philippine showbiz, you all are still acknowledging and recognizing my accomplishments. I hope to continue making you proud but more importantly hope to be able to come home and see you all soon! I love you all!"