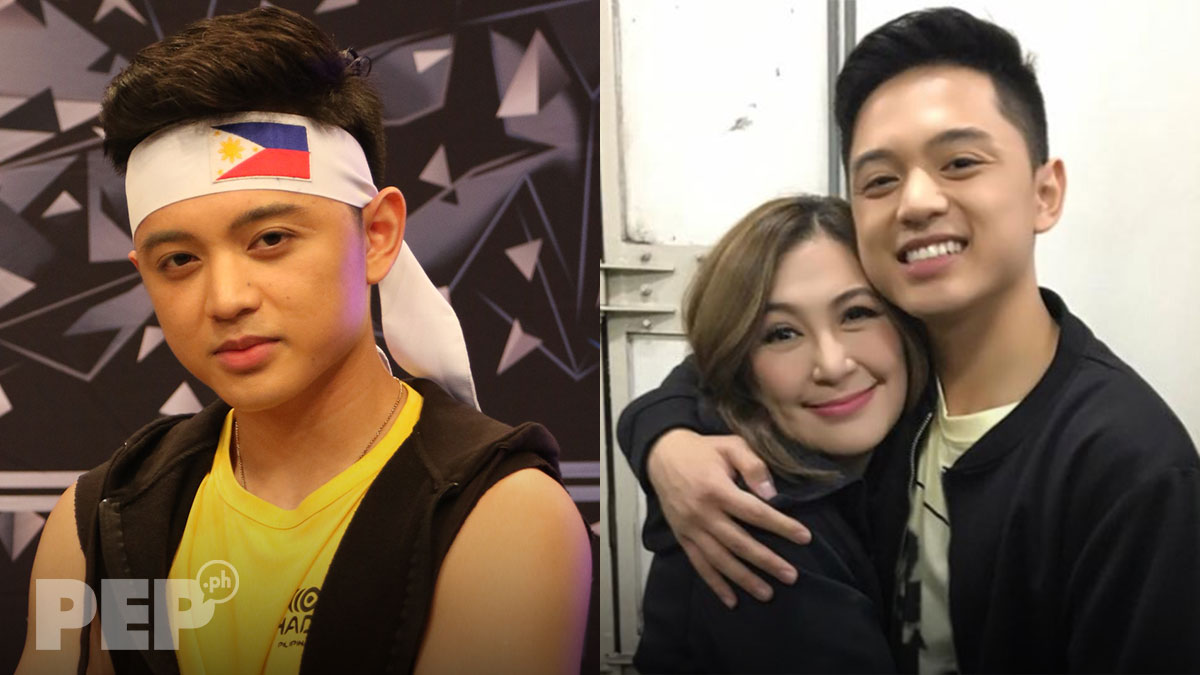 Jeremy Glinoga on his The Voice coach Sharon Cuneta: "She's giving you advice how to be a performer, how to be in this business so I always love it everytime I see her."
PHOTO/S: Noel Orsal / Jeremy Glinoga Facebook page

The Voice Teens fourth placer Jeremy Glinoga was asked for his reaction to Sharon Cuneta not joining the latest season of The Voice Kids.

Sharon was Jeremy's coach during The Voice Teens, which was aired in 2017.

In an interview with PEP.ph (Philippine Entertainment Portal) and a blogger held on August 15 at the launch of Hado Pilipinas, Jeremy commented on Sharon not being part of this season.

"Hindi ko talaga alam anong nangyari. I didn't know what really happened, but I guess it's her decision and whatever she wants, I'm happy because we're like family naman."

Sharon used her Instagram account last July to explain why she is not a coach this season.

The Megastar said back then, "I cannot stand the stress kasi. I become so attached to the kids and it weighs heavily on my heart pag kailangan na mag-eliminate. Nung May ko pa sinabi kay Mr. M yon."

When was the last time Jeremy talked with his The Voice coach?

"I think that was the last time we actually talked, but when we saw each other, we said 'Hi.'

"She asked me how I was, and nakaka-miss kasi siyempre, si Megastar Sharon yan.

"She's giving you advice how to be a performer, how to be in this business so I always love it everytime I see her.

JEREMY ON HOSTING THE VOICE KIDS

The singer hosts the digital program with comedian and TV host KaladKaren. The show gets aired on The Voice of the Philippines's YouTube channel.

Jeremy said about this, "It's a new experience naman for me. I always like going out of my boundaries.

"So being with Ate Kaladkaren and everyone in the staff again, it brings back the memories, memories back in The Voice Teens and being in the process.

"But in this side naman, you get to see what the kids are feeling as they go through the process and sobrang galing ng mga bata, ha.

"It's amazing to be co-hosting with Ate Kaladkaren which I learn a lot from her talaga.

"She teaches me so many things and I get to see how she works.

"Sobrang thankful ako sa opportunity. I just want to say thank you to The Voice staff."

PEP.ph asked Jeremy how he was tapped to be the host of the DigiTV.

He explained, "I think there was an audition process but it was... there was a time when I hosted but di pa ako sure kung maghu-host ako sa next show, so it was like a trial period.

"But I think, show after show, they saw my improvement and my chemistry with Ate KaladKaren so I think they liked it and I'm so thankful that they liked it.

"Pero dito naman, I think it's cool because I get to have my insight on how my experience was throughout The Voice and I get to share my thoughts with the kids and give them message on how to deal with pressure or what they can do in the competition."

After tapping him to be a host of The Voice Kids, ABS-CBN got Jeremy as one of the ambassadors of the Hado Pilipinas sport.

Hado, which originated in Japan, is a brand of augmented reality games.

ABS-CBN brings it to the country as Hado Pilipinas, a team sport that merges the fun of dodgeball with augmented reality energy balls and shields.

Jeremy is one of its ambassadors along with Jairus Aquino, Arabella del Rosario, Aiyana Perlas, Samm Alvero, and Kimson Tan.

According to Jeremy, he is very happy to be chosen to be one of the sport's ambassadors since he is also a gamer in real life.

He said, "The first time I tried it, parang nagulat ako, e, kasi the graphics are so on point and the reaction time, it's precise.

"I was happy when I saw it and getting the news na part ako dito and being one of the first ambassadors dito sa Philippines, I was so honored because if I'm a first ambassador of something and I like what I'm supporting, I don't feel like it's a job, it's a hobby.

"May competitive vibe between the girls and the boys which is also good."

With two big projects on his lap right now, Jeremy is thankful that he still remains active in showbiz, especially since his batchmates chose to shy away from the limelight.

Jona Soquite was the winner, while Lala Vinzon and Mica Becerro placed second and third, respectively. Jeremy was the fourth placer.

He said, "I just want to say thank you to God, unang una.

"It's been two years at sobrang daming nagbago, kasi ever since then, I've been venturing into new things like hosting, I've been taking classes on hosting, public speaking. I just kept learning and learning."