Most-talked about moments during #ASAPNatinToBayArea 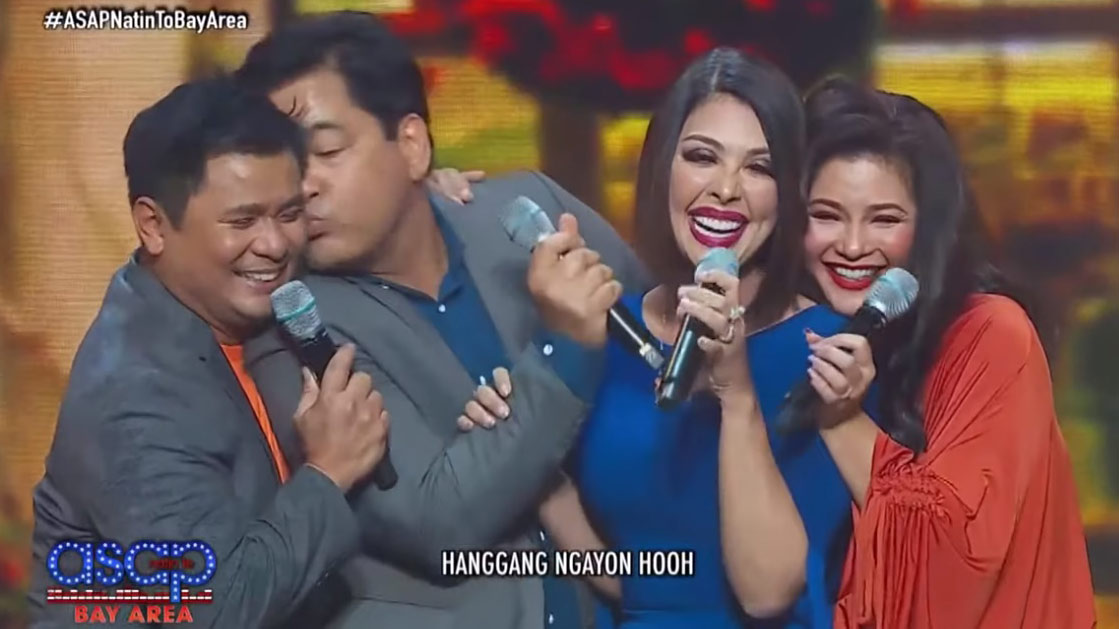 A lot of memorable moments took place when ABS-CBN stars performed for their kababayans in the United States recently.

Last August 3, ABS-CBN brought its Sunday-afternoon musical-variety program, ASAP Natin ’To, to the U.S. in celebration of the 25th anniversary of the network’s overseas broadcast arm, The Filipino Channel (TFC).

TFC is based in the San Francisco Bay Area in the state of California, and the star-studded show with the hashtag #ASAPNatinToBayArea, took place at the SAP Center in San Jose, California.

A-list Kapamilya artists performed with former colleagues now based in the U.S., as well as Filipino-American singers.

The episode, which used the hashtag #ASAPNatinToBayArea, aired in the Philippines on August 18, 2019, and it elicited various reactions from netizens.

A. Netizen recalls defunct GMA-7 show that used to be ASAP's rival

This is because the husband-and-wife team of Ogie Alcasid and Regine Velasquez shared the stage with Martin Nievera and Pops Fernandez, who happen to be former spouses.

Martin and Pops, on the other hand, are pioneers of ASAP, which began in 1995.

The quartet performed a medley of their hits, "Hanggang Ngayon" and "Kahit Isang Saglit," to the delight of the audience.

Martin and Pops, who were married from 1986 to 2000 and have remained close friends, got a good teasing from Ogie and Regine.

While Martin and Pops were singing their parts in the production number, Regine and Ogie got the two long pieces of fabric from Pops’s dress and wrapped them around Martin and Pops.

Then Ogie modified some lyrics.

Martin laughed upon hearing the new line from Ogie.

Twitter user @MARKFRANCIA6 posted a video clip of their production number and wrote:

"ASAP and SOP in one screen"

B. Production number of JoshLia gets criticized by fans

Joshua Garcia and Julia Barretto, who are known together as the JoshLia love team, made a lovely pair onstage as they sang their version of Bailey May and Ylona Garcia’s kilig duet, "O Pag-ibig."

But they failed to impress some ASAP viewers.

The reason may be something to do with Julia’s involvement in the recent breakup controversy of fellow Kapamilya stars Bea Alonzo and Gerald Anderson.

Julia and Joshua themselves broke up last June, and have since professed to remaining best friends with each other.

After the show, though, photos of Joshua eating solo surfaced online that made some netizens question Julia’s sincerity.

Another netizen observed the body language of Joshua and Julia and described it as "cringey." 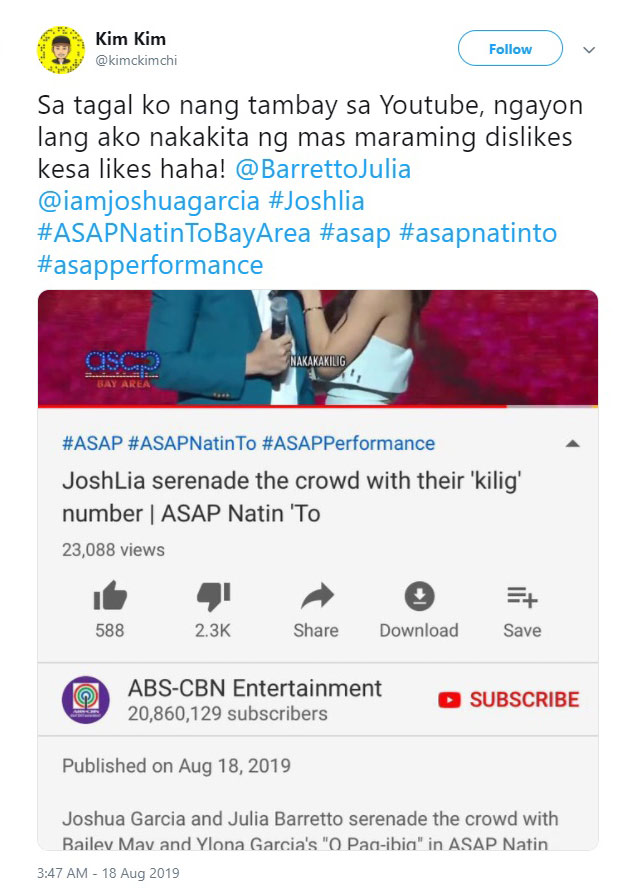 C. Regine Velasquez became the envy of girls because of her kilig moment with Coco Martin

Coco Martin did an all-out performance of a Hagibis medley with rappers Bassilyo and Smugglaz.

The lead actor of the long-running action-drama series, FPJ’s Ang Probinsyano, also gave Regine Velasquez a buss on the cheek.

Regine made the most of her time with Coco by telling the action star: "Coco, isa pang kiss! Di ko naramdaman." The shy Coco kissed Regine once again on the cheek and Asia's Songbird triumphantly shouted, "Inggit kayo lahat sa akin!"

That #CocoGine kilig moment got everyone excited, and, who knows, it may inspire a future onscreen collaboration.

A netizen even predicts:
Continue reading below ↓

Love was in the air when Daniel Padilla and Kathyrn Bernardo—who are known together as the KathNiel love team—performed a medley of Orange and Lemons hits.

They kept it that way while doing their spiels. Daniel described Hanggang Kailan, a tune about a long-distance love affair, as “my song for my lady.” “Tagos sa ’kin ’yong kanta na ’yon,” he explained.

Daniel alluded to the time when his girlfriend Kathryn was in Hong Kong early this year to film a movie under the direction of Cathy Garcia-Molina.

That movie, Hello, Love, Goodbye, starring Kathryn Bernardo and GMA-7 star Alden Richards, is the current toast of the movie world. So far, it has raked in P600 million in domestic box-office gross.

During the Hong Kong shoot, Direk Cathy prohibited Kathryn from communicating with Daniel so the actress could fully internalize her OFW role.

Daniel asked who among the audience members were in love then he directed the same question to Kathryn.

She replied by asking instead what the audience thought, and she got rousing cheers. But Daniel insisted on hearing Kathryn’s answer, as seen in the YouTube video uploaded by a fan named Jacqueline Epstein.

He then turned to the audience: “Thank you very much, pero gusto kong marinig kasi talaga galing sa kanya.”

Another video, this time uploaded on Twitter by my_maruchan, showed the rest of the KathNiel kilig moment.

Then went on granting her boyfriend’s request for a kiss.

In another segment in the ASAP show, Daniel couldn’t help raving about Kathryn.

He continued by addressing Kathryn by their term of endearment for each other, Bal (short for kambal).

“Bal, from my heart, I am very proud of you. Hindi lang ’yon—you deserve it. Para sa iyo ’yon. I love you.”