Piolo Pascual on KC Concepcion's tell-all interview: "I felt bad for her because she didn't have to resort to that." 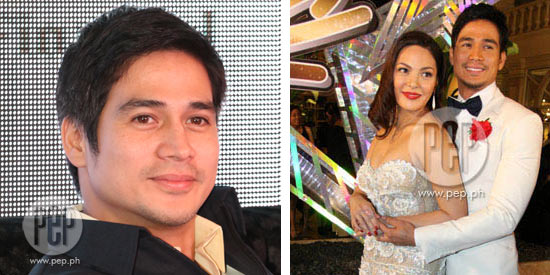 Piolo Pascual says about tell-all interview of KC Concepcion regarding their breakup: "It's just something that she did that I wish she didn't do."

Piolo Pascual made several startling revelations on a recent E! News Asia Special. Dubbed as the Filipino heartthrob who has been on the top of his game, Papa P as he is widely called, is the first male celebrity to be featured on E! News Asia.

He deserves that privilege. When his Hawak Kamay leading lady Iza Calzado was interviewed for the TV special, she proudly called the ABS-CBN actor as "the most successful, the most popular matinee idol in the Philippines."

When Liza Latinazo, NBC Universal country manager, was asked during the E! News Asia press conference why they chose the actor, Liza quickly explained, "although he has been in the spotlight for almost two decades, he is very reserved and continues to be an enigma to us."

She said that Piolo, despite the fame and popularity is really quite "private, he is naturally quiet and shy, and because of that there is always a mystery about him and he continues to intrigue us." She promised that the TV special would give Asian viewers a "better understanding of the man himself, what his relationship is like with his 17-year old son, what is his love life like, has he found true love, is he dating anyone," and so much more.

And E! News Asia lived up to its promise. They followed Piolo around everywhere for five days, even to the bathroom!

ON CONDUCTING A DNA TEST ON HIS SON. It is in this TV special that viewers find out how Piolo first knew he would become a father and his reaction to it, told in an amusing anecdote by sister Chiqui Gonzales.

E! News Asia narrates that when Piolo was an "up-and-coming actor at 20 years old, his girlfriend at the time revealed she was going to have his baby."

Sister Chiqui shares Piolo "was in denial, he doesn't want to accept that Iñigo was his son, so they had this DNA test and it was 99.9%!"

Piolo shared how Inigo changed his life in so many ways, "when he came into my life, I was already working and I had to prioritize, I guess, but it was good it wasn't an overnight change and I would look at him I would see him and it would make me feel that I had to be responsible for him because he would look up to me, he would copy whatever I do so I had to be responsible. In that aspect I guess, he made me become a better person because I knew that there was somebody looking up to me trying to copy what I was doing."

ON JUDY ANN SANTOS. In this E! News Asia Special, Piolo also fondly recalls the very first woman he was teamed up with for a love team and the special place she has in his life. "We were together for several years and I'd wanna say that because of Judy Ann I was able to go mainstream because of the love team and people liked that. People want inspiration, it's very aspirational you know, people wanting you to be together, people wanting you to have that kind of real thing and I won't deny the fact that there are still people who are still aiming for or praying for that."

E! News Asia showed how Piolo would go to fans, hugging and kissing, saying hi to them on his way to taping. Piolo explains his very well-grounded view of his fans, "You gotta give it back to them because they are the reason why you are where you are right now and at the same time if you give them that chance to get a glimpse of you, shake your hands or even kiss you on the cheek, they won't forget it."

The TV special also showed how Piolo steadily raked in awards after awards for his work on the small screen, the silver screen and music.

Piolo reveals that "ever since I got validated I felt recognized so I thought to myself maybe there is something for me in this business so I got married to my work and I just never looked back."

Throughout his twenty years in the industry, Piolo has also had to deal with controversy upon controversy. He shares how he has learned when to speak and when to stay quiet, "sometimes it gets the better of you when you're caught up, that time you're so vulnerable, so sensitive and you end up answering back and you regret doing that."

For Piolo, intrigues and controversies are "part of it, it's part of the package, it's part of what you signed up for. It can't always be sunshine, it's how you deal with it."

ON BREAKUP WITH KC. One of the biggest controversies to rock Piolo's world was his relationship and breakup with KC Concepcion. Having kept his silence for so long he talks about that experience haltingly, "Either way, I knew she was going to talk about it. I felt bad for her because she didn't have to resort to that, I still love her with all my heart but it's just something that she did that I wish she didn't do."

Referring to the tell-all but cryptically worded TV exclusive KC came out in, Piolo remembers how for "that chapter of my life, I must have gotten 500 support messages." He reveals how fellow actor John Lloyd Cruz even sent a text, saying that "whatever I'm going through he prays for me, so I go, ‘Thanks man.’ I've never received so much support."

During his October 6 press conference for Sunpiology, Piolo avoided talking any more about his ex-girlfriend.

"As much as possible, ayaw ko nang magsalita about it. “We didn't know what was going to come out.

“When I was interviewed, no anything about her... “I didn't know that they were going to release it.”

ON QUITTING SHOWBIZ. Before the phenomenal success of his latest movie Starting Over Again in 2014, Piolo was indeed ready to hand in the towel. He felt that he had enough of living his life in the public eye and wanted out. It was also a time when he knew he wasn't as popular as he was before. He recalls, "one of the reasons I wanted to quit was because I wanted to get my life. I thought I'd reached the glass ceiling. If you ask me if I'm gonna miss being popular, that's one thing I dreaded the most. I prefer to be anonymous, I prefer to keep to myself. Thinking about quitting makes me feel that there's something else other than showbiz."

But fate had other things in store for Papa P and he shares, "when the movie made it big, my unit head said I never met anyone that people have prayed so hard for, for vindication or anything. It's not something you ask for, I was just doing my job and when it happened, it just happened. I guess it wasn't my time yet to quit."

Over the past two decades, Piolo has risen to the top of the pack and it looks like that is where he will stay. He reveals, "I see people come and go, but what would set you apart is your passion and your dedication to your work."

Surprisingly, he also shares an interesting fact about him regarding ASAP, a Sunday variety show that he has been a part of for the past 15 years. “Every week is a struggle for me, I never get used to waking up early on a Sunday because that's supposedly your rest day. As much as I never get used to it, it never gets old."

The ever-so humble but multi-accomplished hyphenate actor concludes his own TV special by sharing what he believes defines him, "material things don't define me, it's part of life. It would be nice to drive a good car, live in a nice house but does that define you as a person? No. What defines you as a person is how you perceive yourself to be, how you know yourself and how you project yourself. At the end of the day, it's all about waking up to a new day and becoming a better person than how you were yesterday."