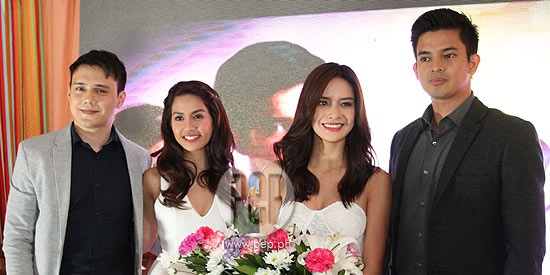 Expect a slight change from the original version of Two Wives when its Filipino adaptation airs on ABS-CBN this Monday, October 13.

At the press conference for the newest ABS-CBN primetime series, Direk FM told entertainment media that they had to tweak some details to make the story relatable to Pinoy audience.

He admitted, “We all fell in love when we did this material because we did not just concentrate on their relationship.

“When we were briefed and we got the whole literature of the material, lahat kami hindi makakuha kasi ang lalim-lalim niya.

“For one, me being a viewer also of other shows, sabi ko, 'Okay, this is a wonderful material.'

“When I started reading it, very Filipino.”

Other than this, he said, “We would like to believe that we retained the very essence of the show.

Two Wives is a Korean drama series that aired on ABS-CBN in 2012. It is part of the so-called “Wife Trilogy” in Korea—the other two being Temptation of Wife and The Return of the Wife, which were both aired on GMA-7.

A loving mother to her son, Yvonne thought that she is lucky to have a perfect family with her husband Victor. But their happy marriage will suddenly change when single mother Janine enters the picture.

Victor and Janine will start to have a forbidden romance when Janine hires Victor to pretend to be the father of her daughter. The single mom loves her child so much that she is willing to pay a big amount of money monthly to someone who can stand as her father. As their love affair blossoms, Victor will turn cold in his relationship with his wife Yvonne.

Yvonne will discover her husband’s secret and she will get hurt even more when Victor files for annulment just to be with his mistress.