Barbie Forteza reveals The Half Sisters extended until 2015; enjoys playing a “b*tch” in Kpop-themed movie 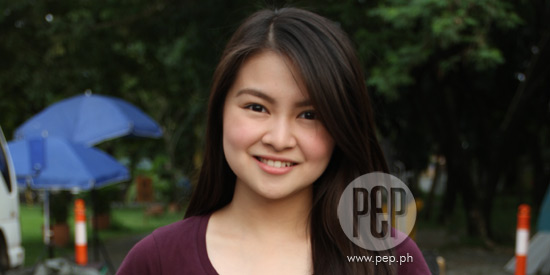 According to lead actress Barbie Forteza, The Half Sisters will air on GMA-7 until the second week of January 2015.

Barbie Forteza, who plays the much-maligned Diana on GMA-7's top-rating show The Half Sisters, is riding a high, both as a TV and film actress and even as her character Diana.

Finally, over the past few weeks her character Diana is getting to stand up for herself after being put down by the show's villains for so long.

This week alone, Ashley (Thea Tolentino) is forced to ask for forgiveness from Diana upon Bradley's (Andre Paras) urgings; Bradley and Diana share a near-kiss when Bradley rescues her from her unintended fall; Diana becomes closer to Lola Lupita and Diana gains valuable information regarding the truth of Ashley's suicide and the real score of what is happening between Rina (Jean Garcia) and Alfred (Ryan Eigenmann).

Based on AGB Nielsen data, The Half Sisters often emerged as the second most-watched daytime program in Mega Manila, next only to Eat Bulaga.

Barbie considers the ratings success unexpected as she doesn't get to follow the show as much on air as they tape events and scenes that are at least two weeks in advance. She reveals, "basta kami, actually hindi ko nga nasusundan kung ano pinapalabas at nangyayari, so bigla na lang namin nababalitaan na maganda ang feedback at reviews at yun, extended nga, kaya masaya!"

The emotions running through her with the knowledge that The Half Sisters will air until the second week of January 2015 are profoundly simple, "ang sarap ng mag-plano para sa Pasko!"

Having been together since June 2014, and even earlier since teleseryes tape in advance, Barbie doesn't hesitate to share who she's closest with among the cast of The Half Sisters.

It's strange how they can be the basest of enemies onscreeen, but off-screen be as close as they are.

While Ryan doesn't give her any advice, what they do share is something Barbie's character in an upcoming movie is fond of doing. She explains, "puro kami pranks, kalokohan. Basta marami kami sa Instagram! Check it out," she adds.

ON PORTRAYING A “QUEEN B*TCH.” With her success on the small screen, Barbie is now also working on securing favorable reviews once her movie Saranghaeyo, a Kpop-themed indie film comes out this December 3 for mainstream release.

As of press time, she's had six shooting days for this project where she stars alongside ABS-CBN's Francis Magundayao and Jon Lucas and some TV5 stars.

She tells us what her role in Saranghaeyo is, and it might surprise her fans that this is the role she plays. "I'm the queen b*tch na binubully ko si Francis and then later on, mafa-fall ako sa kanya, na yun mga pranks ko ay para lang babalik sa akin."

How hard was it for Barbie to play a kontrabida role like this, especially since she normally plays the “underdog” bida who turns into a palaban-bida but never really the villain?

As both Francis and Jon are younger than Barbie, she guarantees, "wala, walang kissing scenes! Mas lalong hindi pwede."

In the story, her character is an avid Kpop fan, something that is not her reality as Barbie Forteza, "I really don't relate. I have nothing against Kpop. It's just ang hirap makagusto ng isang bagay na hindi ko naintidihan."

To aid her understanding of Kpop, Barbie took it on like the professional that she is, "I tried listening to songs, some of the Kpop songs, masaya! Ang naintidihan ko yung tono, pero the lyrics itself, wala. Pero ayun, nakakatuwa, even their looks, sobrang colorful, sobrang bright. Doon ako natuwa."

Fresh from her Cinemalaya 2014 Best Supporting Actress win for her role in Mariquina, does Barbie feel any pressure to do as well with this upcoming movie?

Now that she's 17, what and where is Barbie putting her hard-earned money to use?

She proudly shares, "I got my license. Driving license nung August. Talagang prinoject ko siya. So I'm saving for my own car. Iba yung for taping na sasakyan, iba yung for personal use."

Why is she saving up for a car? Barbie, very straightforwardly answers, "gusto ko mag-drive! I wanna drive long, I wanna go somewhere na someplace far. Far from people!"

What are her other goals now at this crucial time in her teenage life?

"I wanna see my sister sa Chicago, I wanna go there and I want to have my own condo."

She explains that while she already shares a condo with her parents, "I wanna have my own. Pero siempre I'll start sa car, medyo mas madali siya!"

Does this mean she's not planning on even thinking about her love life right now?

No one closer to her age, we jokingly ask. "Wala pa, wala pa, mag-iintay pa ako."