Gloria Diaz on Insatiable experience: "The more they welcomed me, the more stressed I became, the more I said, 'Am I gonna be able to deliver?' So I got more nervous."
PHOTO/S: James Patrick Anarcon / Netflix

Gloria Diaz felt overwhelmed when she became part of an international show: the second season of the Netflix original series, Insatiable.

The Miss Universe 1969 title-holder is cast as a beauty titlist-turned-pageant coach in the second season of the series, which will start streaming on October 11.

During the press conference, the Filipina celebrity gave her observations about doing a Hollywood production.

Gloria, who has done several movie and TV projects since the 1970s, said that the working style in the Philippines is "totally different" from the working style she experienced while doing the Netflix original series.

She focused on the wardrobe provided for artists.

She said, "Well, I was quite overwhelmed because in the Philippines, we do it totally different.

"Our stylists come with 10 dresses, when they start dressing up [actors].

"But when I got to your dress area, the warehouse, I was so shocked!

"How many years has this been accumulating? So, I figured, it's just one season and everything.

"We just do it very differently here."

Gloria added that she was also taken aback by the treatment she received on the set.

She narrated, "I was just overwhelmed how the treatment of everything.

"So many people were so kind. When I got in to the set, they're so nice. 'Oh, welcome. Welcome this and that.'

"But like I said, the more they welcomed me, the more stressed I became, the more I said, 'Am I gonna be able to deliver?' So I got more nervous."

Gloria then told Dallas and Debby that if they will do a project with her in the Philippines, she would give them the same treatment she received on the set of Insatiable.

She said with a smile, "So I'll put you in the same situation in my set here in the Philippines!

At the time when Gloria shot her scenes for Insatiable, she was also doing a Pinoy teleserye: the recently concluded ABS-CBN afternoon series Los Bastardos.

Gloria has had experience doing teleseryes for the three networks in the Philippines.

In fact, she was part of a beauty queen-themed drama series in GMA-7. This was the Iza Calzado-starrer Beauty Queen that aired in 2010.

Gloria was also able to do one teleserye in TV5, which was Glamorosa (2011).

GLORIA DIAZ ON GETTING THE ROLE

During the press conference, Gloria narrated how she got the role of Gloria Reyes in Insatiable.

She said, "They just Viber-ed me and I thought it was a mistake. I thought, maybe, they weren't referring to me.

"I get a lot of text and viber [messages] and I didn't really answer it in the beginning, and then, they Viber-ed again about this. And I said yeah, I said okay. That's it."

The 68-year-old beauty queen-actress admitted that she was surprised when she got the role. She then had to binge-watch the entire first season of Insatiable so she could get an idea about the milieu.

"I was even surprised because I said, 'What role will I do?' I just couldn't think, I didn't realize what was gonna be my role and then I started watching it.

"And then I said oh my God, because when you watch it for the first time, you think it's a teenybopper show and then as you go on, exacty what it says! Sex, violence, language.

"I said, 'this is very interesting.'"

According to Gloria, it was her daughters, Isabelle and Ava Daza, who first learned about her inclusion in the series.

"Of course, my daughter Belle knows Insatiable, and then Ava, and all my nieces, because in the beginning, it's like a teenybopper.

"So I asked the younger generation, because the older generation sort of didn't really have an idea. 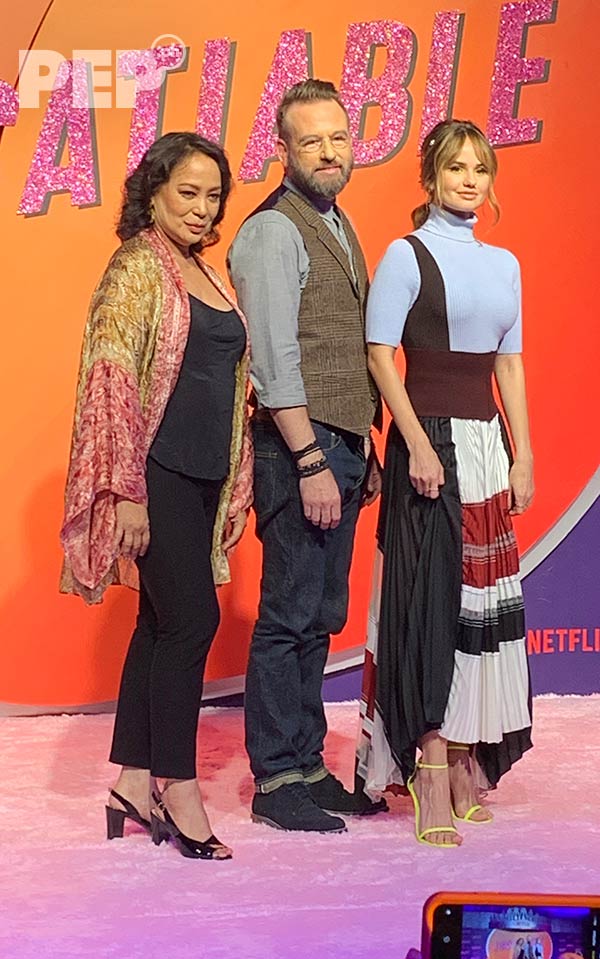