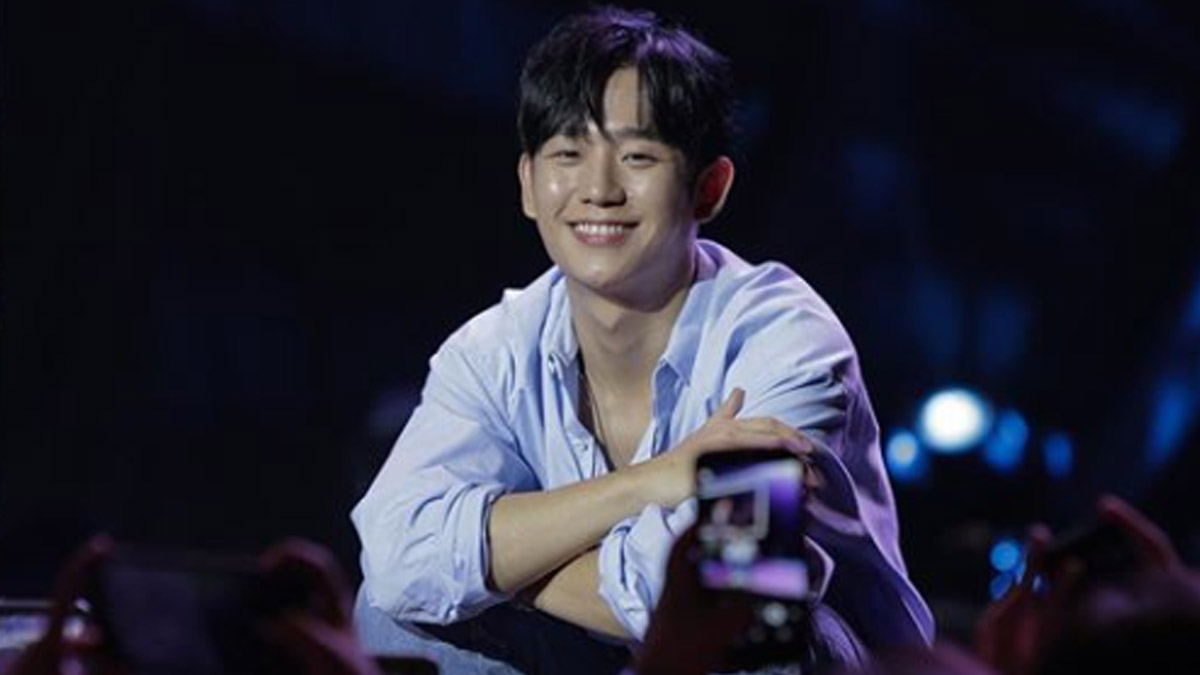 One Spring Night star Jung Hae In staged his One Summer Night in Manila fan meet event on September 28, 2019 at the New Frontier Theater in Cubao, Quezon City.
PHOTO/S: @wilbroslive on Instagram

Hallyu Wave is taking over the country these past few weeks with South Korea's top heartthrobs visiting Manila for their fan meets.

Last September 28, South Korean actor Jung Hae In returned to the Philippines to meet his Filipinos fans for the second time.

Produced by Wilbros Live, the event titled One Summer Night in Manila was held at the New Frontier Theater in Cubao, Quezon City.

Hundreds of the actor's local fans lined up for hours just to see him in person.

The venue was filled with ear-deafening screams the moment he stepped on the stage.

Hae In serenaded his Pinoy fans by performing a cover of Paul Kim's "Every Day, Every Moment."

Right after his performance, radio and events host Sam Oh went on to interview the Korean actor. She also helped translate the actor's answers to English.

Hae In expressed how thrilled he is to meet his fans again. He said, "My Filipino fans are not shy after all."

He continued, "I opened the show with the song and I was so shocked by all of the screams... I was here last year and I'm here again for another fan meeting and I'm so happy to be here. And I missed all of you."

During his opening interview, Hae In expressed his desire to have a vacation in the country.

He said, "Hopefully, the next time I come, it can be a leisurely trip and I would like to see more of the country."

The 31-year-old K-drama actor took the opportunity to express his gratitude towards his Filipino fans and international fans who flew in just to see him at the fan meet.

After the short interview, Sam served Hae In a glass of calamansi juice. Fans were surprised to see the actor consume the drink in a matter of seconds.

During the interview, Hae In revealed some facts about him: he is not a morning person, he sets alarms every five minutes, and he usually does not have breakfast.

A big portion of the fan meet was dedicated to games and fan interactions.

During the "Tournament TMI" segment, fans were asked to answer questions about Hae In. The winners got to take home special prizes from the Something In The Rain actor.

Another highlight of the event was the "Pharmacist For Your Soul" segment where Hae In gives fans his "prescriptions" or advice about their problems.

An Indonesian fan named Haya Rakki asked the South Korean heartthrob what she should do after breaking up with her boyfriend of two years. Haya revealed that her fangirling over Hae In was the cause of their break-up.

Hae In was caught off-guard by the fan's revelation but he was able to give her touching advice.

He said, as translated in English by Sam, "I think your decision was right. I respect your decision and for me, it's very important for a person to love yourself. I appreciate so much you flying all the way from Indonesia to come and see me. You love me so much and so, you're doing this. But I hope that you get to a place that you love yourself more than anyone else."

After this, Hae In went to play more games with his fans.

During the "Mission Possible 123" segment, Hae In was challenged to complete five missions within 123 seconds.

The actor failed to do the challenges during the allotted time. Lucky fans were picked to do the "penalties" with Hae In. These involved doing a "Good Night" video, taking a polaroid photo with the actor, getting a 3-second hug, and signing a piece of paper with the actor's autograph.

Lucky fans also won signed posters and a shirt that Hae In personally drew on.

In addition to his opening number, Hae In performed two more songs for his fans including "When The Wind Blows."

Towards the end of the event, Hae In told the audience, "I want to thank each one of you. I will never forget you. I hope you're always healthy and not get sick, so that you will be happy in your lives. Mahal kita."

After the show, GMA-7 actress Jean Garcia described her experience after seeing the actor in person.

Sam also could not handle the kilig and shared her selfie with the actor.