10 Things To Know about Pangako Sa 'Yo: Then and Now 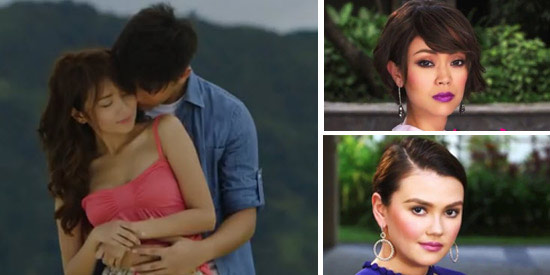 Danilla Padilla and Kathryn Bernardo are the new Angelo Buenavista and Yna Macaspac in ABS-CBN's remake of Pangako Sa 'Yo. Jodi Sta. Maria (upper right frame) is cast as Amor Powers while Angelica Panganiban (lower right frame) will play Claudia Buenavista.
After fifteen years, Pangako Sa 'Yo will once again
be shown on television.
Daniel Padilla and Kathryn Bernardo will portray the complex love story of Angelo Buenavista and Yna Macaspac in ABS-CBN's remake slated to air in 2015.
Ever since the Kathniel tandem recreated Pangako Sa 'Yo for the Kapamilya Network's 2013 summer station ID, there has been high interest in the show that originally starred Jericho Rosales and Kristine Hermosa.
For the 2015 remake, Rory B. Quintos is once again tapped to helm this drama series after directing the original 2000 teleserye.
Daniel and Kathryn will bring life to the young lovers who are caught up in a web of lies and are shocked to discover that they might be siblings.
Before Pangako Sa 'Yo returns to TV, here are ten things that you might want to know about the teleserye then and now:
1. Jericho Rosales once believed Kimerald (Kim Chiu and Gerald Anderson) would have been suited to topbill the Pangako Sa 'Yo remake.
In a 2012 interview, Jericho stated his opinion that Kim and Gerald could have taken over the roles of Yna and Angelo.
"Honestly fan ako ni Kim Chiu and Gerald Anderson, yun lang honestly. Nung nakita ko 'tong dalawang 'to, sabi ko, pwede 'to kung gagawin nila 'yung remake ng Pangako Sa 'Yo,'" said Jericho in a previous interview with ABS-CBN News.
"Nag-aalab ang init ng love team namin nun, e, nung panahon na yun. So that's something to remember, something na pwede mong balik-balikan at alalahanin."
This 2014, however, Jericho pointed out that Daniel and Kathryn deserve to star in the remake Pangako Sa 'Yo because "ang lakas-lakas ng loveteam nila."

(Read: Jericho Rosales says Kathniel deserves to star in Pangako Sa 'Yo remake)
2. Daniel Padilla is almost the same age when Jericho Rosales took on the role of Angelo.
Jericho was 21 years old when he portrayed Angelo in the original teleserye. Meanwhile, Daniel will turn 20 years old by April next year.
3. Kristine Hermosa was a minor when she portrayed Yna in the original Kapamilya soap.
Kristine Hermosa was just 17 years old when Pangako Sa 'Yo was aired in 2000.
Meanwhile, Kathryn Bernardo celebrated her debut earlier this year and she will turn 19 years old by March 26, 2015.
4. Angelica Panganiban and Jodi Sta. Maria are cast as young mothers in the remake.
For the 2015 version, Angelica Panganiban will play Claudia Buenavista, the role originally portrayed by Jean Garcia.
Meanwhile, Jodi Sta. Maria will portray Amor Powers, a role previously played by Eula Valdes.
In the original 2000 teleserye, Eula and Jean were both 31 years old when they were cast in the show.
Angelica celebrated her 28th birthday last November.

Jodi, who is tapped to portray the mother of Kathryn's character, will turn 33 in June 2015.
5. Jodi Sta. Maria initially denied that she would portray Amor Powers.
After portraying the bubbly Maya in the now defunct daytime teleserye Be Careful With My Heart, Jodi is now cast as the feisty Amor Powers.
When Jodi was asked whether or not she would play Amor Powers last September, she denied that she would portray the maid-turned-business tycoon in the remake of Pangako Sa 'Yo.
(Read: Will Jodi Sta. Maria become the next Amor Powers?)
6. Eula Valdes admitted that there was a time when she "hated" Amor Powers.
At one point in her career, Eula Valdes was so identified with Amor Powers that she came to a point when she "hated" portraying the sinister villain.
(Read: Eula Valdes explains why she used to hate playing Amor Powers)
"May time, naging hate ko siya, kasi nawalan ako ng identity," Eula told PEP in an interview earlier this year.
"Pero, natanggap ko na rin na gano'n talaga. And, pasalamat na lang ako, na nagkaroon ng puwang yung ginawa ko, hanggang ngayon...
She also admitted, "May panahon na nairita ka lang, 'Hindi na ako 'yan!'"
In that same interview, Eula named an actresss whom she believes is capable of bringing life to Amor, the character hell-bent on exacting revenge on the Buenavistas.
"Bagay si Jodi Sta. Maria," said Eula. "Siya lang ang nakikita kong puwede, kasi magaling mag-adjust yung bata na ‘yan. "Antagonist-protagonist din si Jodi."

7. Jodi Sta. Maria was part of the original teleserye as the younger sister of Jericho Rosales' character.
Jodi was 18 years old when she portrayed Lia Buenavista, a girl who feels unloved by her own mother. As Lia, she was the kind hearted daughter of Eduardo (played by Tonton Gutierrez) and Claudia (played by Jean Garcia).

8. Pangako Sa 'Yo was known as The Promise when it was localized in Cambodia.
ABS-CBN dubbed Pangako Sa 'Yo as its "most successfully distributed canned TV series worldwide."
The Cambodian Television Network (CTN) bought its format from ABS-CBN, paving the way for the series to be aired on the most watched channel in Cambodia.
Production on the Cambodian adaptation (titled The Promise) started by the first quarter of 2013, with scenes being shot in Phnom Penh.

9. Pangako Sa 'Yo has been aired in over 20 foreign territories since 2002.
It has been shown in over 20 territories such as Cambodia, Indonesia, Thailand, Singapore, China, Kenya, Ghana, Namibia, Zambia, Botswana, and Uganda, among others.
Pangako Sa 'Yo was aired on China’s national television and rated second in overall local and foreign programs airing in that country.
10. BY THE NUMBERS
Airing date of original teleserye: 2000 to 2002
No. of episodes: 476 episodes
Top-rating episode: 64.9%
Pangako Sa 'Yo was able to get a rating of 64.9% in 2002, based on data from AGB Nielsen Philippines -National Urban Television Audience Measurement (NUTAM). This allowed the Jericho-Kristine starrer to hold the No. 4 spot among the shows with all-time highest television ratings in the Philippines.
PEPsters, how do you feel about the new cast members of Pangako Sa 'Yo? Do you think the remake will surpass the success of the original teleserye? Share your thoughts in the comments section below.
Read Next
Read More Stories About
Daniel Padilla, Kathryn Bernardo, Pangako Sa ‘Yo, ABS-CBN, TV, television
Post a Comment
Featured
Latest Stories
Trending in Summit Media Network