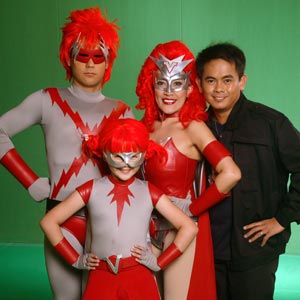 Perla a.k.a. Volta (Ai-Ai delas Alas) will fight aliens along with her children Salty (Dino Imperial) and Pepper (Mariel Pamintuan). What complicates things is that Mark (Jason Gainza, in black), the husband of Perla, is not aware that his wife possesses the power to control electricity. Volta airs on ABS-CBN starting Saturday, January 26.

We've seen her on the silver screen saving people by using her electric powers to crush down her enemies. Now, Volta is back in television to light up every home with action-packed comedy fight scenes.

After four years, the electrifying superhero, Volta, is back to save the world from evil forces. This time she has more strength to fight her enemies through the help of her children who have inherited her super powers.

Volta's director, Wenn Deramas, said that the timing for this remake of the blockbuster comedy-adventure film is just right. He also said that he added a few elements in the TV adaptation to give something new to the show's viewers.

"VOLTA, INA NA!" This is the tagline of the television series Volta. Remember in the movie, aside from being the heroine, Ai-Ai delas Alas also played the human character of Perla, a single woman who is desperately seeking for the man of her dreams.

However, on January 26, which is the start of the teleserye, people will see Perla as a retired superhero and living a normal life as a wife to Mark and a mother to her children—Salty [Dino Imperial] and Pepper [Mariel Pamintuan]—who will later on reveal their super powers.

Perla's simple life is stirred up when her former superhero guru (voiced over by Boy Abunda) asks her to return to her life as a superhero and save the town from an evil alien family that tries to invade the earth.

This is the other thing that Direk Wenn has added to this fantaserye, the Maskulado family, which is composed of Carlos Morales (Incredible Hulk), Jackielou Blanco (Black Hola), Jessy Mediola (Chappy Girl), and Quentin Alianza (Ice Ice Baby).

This family, according to Direk Wenn, was inspired by the cartoon movie The Incredibles, only this time he turned them into the villains of the teleserye.

Aside from getting the attention of its audience, which is the family, Direk Wenn said that he added the "family" factor to see something different from other superhero stories. He explained, "Kaya nga po lalahukan mo ng ganitong klaseng storya—may pamilyang ganito, may ganitong may asawa na lagi mong binibihisan ng bago para lagi silang may nakikitang bago para 'di sila magsawa."

It's not only the story that has been changed, Volta also got a costume make-over. Ai-Ai will be wearing a more cosmopolitan and modern superhero costume. The special effects are also something to look forward to.

Ai-Ai will be joined by her friends in real life and in the movie Volta, Eugene Domingo and Chokoleit. DJ Durano plays the role of Mark's colleague in the crime investigation team called Shokot.

Catch the premiere episode of Volta on January 26, Saturday, on ABS-CBN.


Click MORE PICTURES to view photos of the cast members.