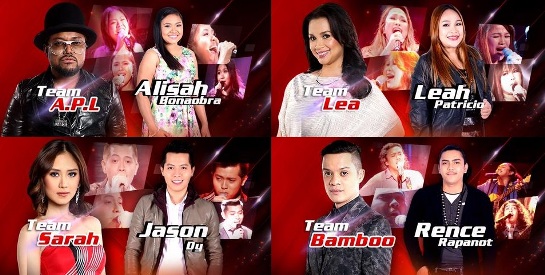 Who among Rence Rapanot, Alisah Bonaobra, Jason James Dy and Leah Patricio will win the second season of The Voice of the Philippines?

The four coaches of The Voice PH Season 2 opened the show with an energetic production number.

Coach Lea and Coach Apl gave a lively interpretation of "Feel This Moment" along with their team's representatives Leah and Alisah.

Coach Sarah and Coach Bamboo then gave a rousing rendition of Ed Sheeran's "Sing" along with Jason and Rence. The Popstar Princess even made the move to do the rap portion of the song.

For the grand finals, there are four rounds: two of which were aired last night while the other two will be shown this Sunday.

Voting lines are opened after every round. Only one vote per sim per round will be counted. The votes from the February 28 episode will be added to those garnered on the March 1 episode.

The winner, who will be chosen solely by the voting public, will be revealed this Sunday, March 1.


FIRST ROUND: ARTIST'S DUET WITH GUEST ARTIST. For the first round, the four finalists had the chance to perform with well-known OPM artists.

Coach Lea described this decision as an "ambisyosa move since Dulce is notoriously difficult to sing with. Take it from somebody who has actually sung with her.

Coach Apl praised Rence for his performance and hailed him as a future OPM artist. "Hey Rence, nakapag-jamming ka with the legends on stage because you deserve it. I love what you stand for, keeping OPM music alive. And I see you as an OPM artist in the future, so good job."

Coach Apl commended Jason by saying, "Amazing job. You have grown so much in this competition. I've seen you dance, do all kinds of different things."

Jason Dy sang "With You"

Coach Sarah made the sign of the cross as she uttered, "Help me Lord." She then addressed Jason when she said: "I will never forget the very first time when I heard your voice, nakatalikod ako at napaka-espesyal nun. I held onto that [memory of his blind audition], pero napatunayan mo na there's more to that. You helped yourself develop into a full-grown artist that you are now, because you are willing to learn. Alam mo na magaling ka pero napatunayan mo na may igagaling ka pa."


Hosted by Toni Gonzaga, Luis Manzano, Alex Gonzaga and Robi Domingo, The Voice PH will feature another set of performances this Sunday, March 1.


PEPsters, who do you think will win The Voice PH Season 2? Share your thoughts in the comments section below.

Continue reading below ↓
Read Next
Read More Stories About
The Voice, The Voice PH, ABS-CBN, TV, television, The Voice of the Philippines
Post a Comment
Featured
Latest Stories
Trending in Summit Media Network