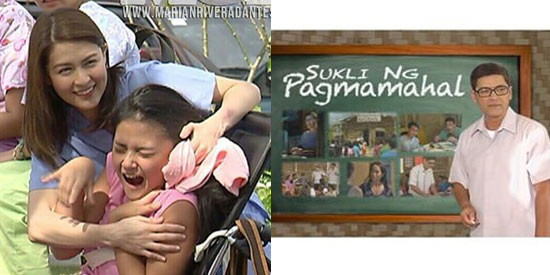 The episode titled Lukso Ng Dugo is directed by Gina Alajar and tells the story of two siblings (played by Ryzza and Aiza) forced to separate due to financial constraints and family conflict.

The Eat Bulaga Lenten Special is an annual tradition that began in 1981 wherein drama episodes are shown during the days of the Holy Week instead of the show’s regular live variety program. The Lenten Special had a brief hiatus for eight years and only returned, due to public demand, on 2014.

This year’s #EBLentenSpecial episodes are airing until April 1. Two episodes will be shown each day during the Holy Week.

Ryan Agoncillo, Wally Bayola and Jose Manalo play gay siblings in the episode directed by Bb. Joyce Bernal titled Pinagpalang Ama. Portraying the role of their father is Joey de Leon. Though this episode sees all EB hosts cry buckets of tears, Ryan confessed that they laughed throughout the taping of their episode. Pinagpalang Ama will be shown on Holy Tuesday.

The story of Pinagpalang Ama was inspired by the life story of a contestant in the “Juan For All, All For Juan” segment whose house was visited by Wally and Jose.

When asked on how he felt about being assigned to play a gay role, Ryan explained, “Natuwa ako. Fan ako ng #EBLentenSpecial. It was my first time last year, kami ni Pauleen magkasama, I played the husband of Pauleen. This time bading-badingan kasama si Wally, Jose, Kuya Joey. Sabi ko, 'Riot 'to.’ I was very excited. It was a bonus na si Joyce Bernal ang direktor na barkada din natin.”

Meanwhile, Anjo Yllana couldn’t help but gush about their episode, Pangako ng Pag-Ibig, directed by Jose Javier Reyes. It tells the story of a wife, played by Pauleen Luna, who stayed with her husband, Rocco Nacino, despite the challenges of their relationship. Pangako Ng Pag-Ibig will be shown on Holy Tuesday.

Pia Guanio stars as her aunt/stepmom while Ricky Davao is the abusive father.

Ryzza and Pia were asked how they were motivated by their director, Gina Alajar, to cry during emotionally intense scenes.

Pia admits, “Kung gusto n`yo ko paiyakin, mamingot kayo ng tuta o apakan n`yo kuting. I’m that kind of person. I’m happy by nature. Direk Gina has been my director for the past 2 years. It’s a feat for her to make me cry every year.

“Every year lagi may pasakit sa `kin. Last year sinampal ako ni Maricel. This year binugbog ako ni Ricky Davao. It’s a huge honor to be battered. I also look forward to it. This is the only chance I get [to show] whatever acting skills I have. I work with the best directors [and I’m with] Ryzza, saan ka pa?”

How was she motivated by Director Gina Alajar during the shooting of her crying scenes?

Why didn’t she do her favorite “walling” style of crying during the taping?

This 2015, two drama episodes per day will be shown starting this Holy Monday all through Holy Wednesday.

Is love the same or different regardless of one’s age?

Growing up reared by an abusive father played by Ricky Davao, Aiza Seguerra has learned to fight back against Davao’s bullying ways. She also encourages her aunt/step mother played by Pia Guanio to leave Davao. But Aiza is devastated when it is her sister Micah, played by Ryzza, who has to go to the province to live with a strict relative, played by Julia Clarete, to escape Davao’s wrath.

In this episode, Pauleen and Rocco get married after Pauleen learns she is pregnant with his child. When Rocco’s character suffers burns on his face, will love remain and stay the same in sickness and in health, `till death do you part?

This episode’s story is inspired from the life story of a Sugod-Bahay contestant in the show’s “Juan For All, All for Juan” segment.

Where will love take you and is it enough to guide you to where you want to go? Kapuso Primetime Queen Marian Rivera stars in the episode Aruga Ng Puso. where she is seen taking care of a child with cerebral palsy played by Bianca Umali.

Vic Sotto went to Cebu to shoot this episode about a teacher who is more than willing to help his students in whatever way he can, but for what price? When you give love, do you expect something in return?