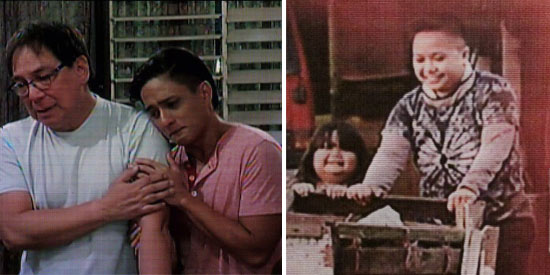 How often do you see bubbly and jolly Eat Bulaga hosts (specifically its comedian co-hosts) act out dramatic roles?

Only in Eat Bulaga’s Lenten Special do audiences see its usual wise-cracking comics do a 180-degree turn and portray roles which require them to cry and express a range of intense emotions.

The inspiration for Pinagpalang Ama is from the life story of a “Sugod Bahay” contestant in the show’s “Juan For All, All For Juan” segment.

It is a welcome treat though to watch Jose and Wally cry buckets of tears instead of delivering punch lines.

Jose Manalo is believable during scenes that require sensitivity and intensity since his emotions – be it anger or sadness - appear authentic. It is evident his talent lies not just in making people laugh, he is also a good actor.

The “drama” in this episode feels contrived thus making the comedy scenes in the story more interesting to watch. But if you want to see Jose and Wally being dramatic instead of comedic then this episode is for you. As a bonus, you get to see Ryan Agoncillo (whose character has a same-sex relationship with a guy) look even prettier than his real life wife Judy Ann Santos.

Ryzza and Aiza play sisters in this episode directed by former child star Gina Alajar while Ricky Davao takes on the role as Ryzza and Aiza’s abusive father. Pia Guanio is their stepmom/aunt who has to give Ryzza to a relative in order to keep the child off the streets. Julia Clarete is the relative who takes Ryzza in yet treats her as house help.

Ryzza is not wrong when she described the episode she is in as “pinakamaganda.” Lukso Ng Dugo provides more emotional nuances, motivations and depth thus making the actions of its characters easier to relate with as well as feel empathy for.

Aiza Seguerra is consistently effective as an older sister who wants the best for her younger sibling. Her affective acting skill alone is more than enough reason to watch this episode.

Ryzza is charming as Micah, but one can’t help but still see Ryzza acting the role of Micah, when it should be the character of Micah who must take over the personality of Ryzza.

Still, Lukso Ng Dugo is a touching and heart-warming treat that is a perfect start for the Holy Week. It is the second episode aired last Holy Monday as part of this year's #EBLentenSpecial.