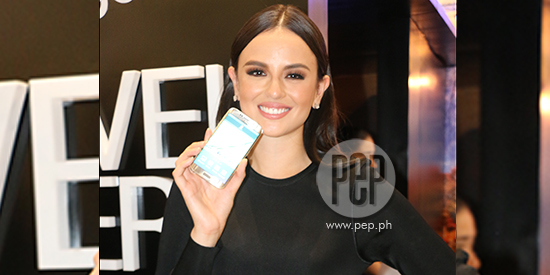 Georgina Wilson gives a message to her bashers: “Bashers, I love you and thank you for watching Asia’s Next Top Model.”

Fourteen aspiring models from all over the region are vying to be hailed as the winner of Asia’s Next Top Model.

In this third season, three up-and-coming models represented the Philippines in the reality-talent competition. These are Franchesca Lagua, Amanda Chan, and Monika Sta. Maria.

Since airing its pilot episode last March 25, AsNTM continues to gain a lot of attention not just from Filipino fans of the television show but as well as from other countries involved in the competition.

AsNTM host Georgina Wilson is overjoyed by the attention being gained by the reality show. “I’m really, really happy because I guess people are really loving the new season.

“That’s the highest rating of the series, nung nag-premiere kami.


“It is the highest-rating episode of the whole series!”

PEP.ph (Philippine Entertainment Portal) and other members of the press got to interview Georgina at the launch of Samsung Galaxy S6 and S6 Edge at SM Megamall last Friday, April 17.

UNBIASED. The beauties of Team Philippines are all doing well as they strive to surpass the challenges of the show, which just aired its fourth episode.

Amanda and Monika already bagged best photo of the week while Franchesca also won a challenge in the past.

The British-Filipina model-host says she remains neutral when it comes to giving girls from different countries a fair chance to win the competition.

Georgina explained, “Maraming potential from the Philippines but also as a judge, I can’t be biased.

“Hindi ako pwedeng maging biased sa Filipino kasi all of those girls are my girls.”

Georgina is joined by returning judge and model-mentor Joey Mead King and Australia's Next Top Model judge and fashion designer Alex Perry in the judging panel.

Asked about how she felt with the show’s reception, Georgina said, “Asia’s Next Top Model is as show na people feel so passionately about.

“They feel really passionate about their candidates. And I love that because that’s what the show is about.

“It’s about people believing in their bet and really fighting for them.

“And you know, like, Asia’s Next Top Model is one of those shows where you get a lot of opinions—positive, negative. But I’m mostly excited.”

MIXED REVIEWS. Hosting is nothing new for Georgina since she has fronted several cable TV shows and events in the Philippines. However, the model-host revealed that her AsNTM stint is the “scariest thing” she has ever done in her career.

Georgina has received mixed reviews from fans of the Pan-Asian franchise of the talent competition, especially from the other countries.

The 29-year-old model-host acknowledged that she was still finding her place in the show during the early episodes of the reality show.

She told PEP, “I think it was seriously one of the scariest things I’ve ever done in my life.

“So even the directors were saying just wait for the episode six, seven kasi medyo shy pa ako.

“And then, episode six, seven, and onwards I know what I’m doing na.

“So, that’s okay, I mean I’m so happy to read all the reviews.

“I was really scared but it’s really as honest as I can be.”

At the end of the interview, Georgina gave a message to her bashers. She said, “Bashers, I love you and thank you for watching Asia’s Next Top Model.”