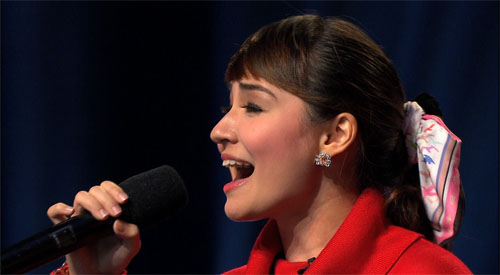 If Gerphil Flores wins Asia's Got Talent, she wants to use the prize money to put up a music studio. "I plan to own a music studio to give opportunities to young kids, to teach them, about classic music and other genres aside classical music."

Gerphil Geraldine Flores is the fourth and final contestant to be given a golden buzzer in Asia’s Got Talent.

The classical singer automatically qualified for the semi-finals when she impressed judge David Foster with her operatic rendition of “Speak Softly Love.”

In an exclusive interview with PEP.ph (Philippine Entertainment Portal), Gerphil shared anecdotes about her life before she entered the talent contest.

FAMILY AND MUSICAL BACKGROUND. Gerphil is a graduate of the University of the Philippines College of Music. The family of the 24-year-old classical singer hails from Bicol.

She shared that she was two years old when she took an interest in classical music. She pointed out: “Pero siyempre for fun lang. I was listening to Mozart, to Beethoven, ‘yong mga gano’n po, classical composers.”

During the phone interview, she revealed her biggest inspiration: "That would definitely has to be my one and only mom. She’s my iron lady.

“She’s the one who got mold of me to be a singer. And I really look up to her.”

Gerphil joined the first edition of Pilipinas Got Talent in 2010, which was aired on ABS-CBN. However she did not make the cut.

But as fate would have it, she is now one of the semi-finalists of Asia’s Got Talent, whichairs Thursday nights at 8:05 p.m on AXN.

GOLDEN BUZZER PERFORMANCE. During the auditions, Gerphil gave an operatic rendition of Andy Williams’ “Speak Softly Love”, which was used in the 1972 film The Godfather.

What was Gerphil’s reaction after that?

“I was super happy. I was really shocked. I wasn’t really expecting that at all.

“So I had this emotion na... parang I don’t know how to react. 'Am I going to cry? Am I going to be really really happy?’

“But I know I was doing good. It was a dream come true.”

Gerphil recalled that she received a hug from David Foster upon being given the last golden buzzer.

“He went on the stage, and as he was approaching me, sabi ko, ‘Oh my gosh I can’t believe this is happening.’”

“He’s going up to the stage and he’s approaching me and when he finally [reached the stage]… he hugged me and he congratulated me.

She also shared that her fellow contenders and batchmates from the UP College of Music expressed their support for her.

“At the backstage, it was really overwhelming. My co-contestants, they all congratulated me. They were so supportive.

“[My batchmates from UP], I think last week, when they saw me, they were so happy. I got good, positive reactions from them.”

There are three ways to vote for your chosen contender: SMS, Facebook and the Asia’s Got Talent mobile app. Voting opens after each semi-final episode and will last for four days. You may visit Asia’s Got Talent’s official website for the full voting details.

How is Gerphil preparing for the forthcoming semi-finals?

“First of all, you have to condition yourself for the singers. Like an athlete, you have to take adequate sleep, at least 8 hours a day.

Even though she is excited, she also feels nervous about enterting the next round of the competition.

“Well, I am part-excited and also nervous at the same time.

“So, mas pressure po talaga siya for me.”

FUTURE PLANS. If ever she wins the reality show, Gerphil says she will dedicate a portion of the prize money to spread interest in music--specifically classical music.

“If ever I win, first of all, I’d like to have a house of my own, because the one that I have right now, it’s not our house.

“And then secondly, I want to have my own piano, the one my mom has been always dreaming ever since I got hooked with classical music.

She also excitedly talked about her third plan, which is to set up her own studio for aspiring musicians.

“And then thirdly, I plan to own a music studio to give opportunities to young kids, to teach them, about classical music and other genres aside from classical music.”

What will she do if David Foster offers to manage her promising career?

She answered, “This is an opportunity that comes only once in a blue moon, so you have to grab the opportunity, when it comes to especially, well coming from this man, of course.

MESSAGE TO SUPPORTERS. Gerphil gave a message for all her supporters.

“Sana po suportahan niyo po ako sa semi-finals, at pag nakapasok po ako, I won’t let you down. I will give you more surprises po sa final round.”