Gerphil Flores THEN AND NOW: missed out on Pilipinas Got Talent to Golden Girl in Asia's Got Talent 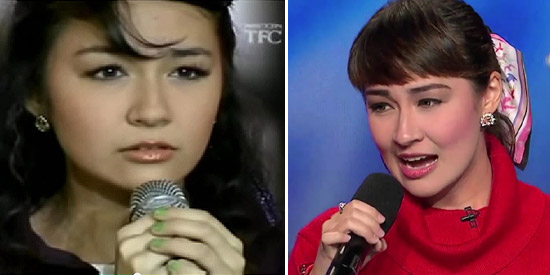 Gerphil Flores is on her way to living up to her former screen name.

She is known for her impressive singing prowess in Asia's Got Talent but before that, Gerphil already tried her luck in another televised competition.

When she joined Pilipinas Got Talent in 2010, she introduced herself as "Fame" Flores, a 19-year-old girl from Don Bosco, Paranaque.

She impressed the PGT judges by performing an operatic song number.

Kris commented, "Hindi man namin naintindihan, naramdaman namin. And that is what singing is all about."

Freddie M. Garcia observed, "You've stylized the high notes too much. I wanted to really hear you sing it."

All of the judges gave her a yes vote, allowing her to compete in ABS-CBN's talent search.

However, during the semi-finals, she was pitted against Sherwin Baguion who eventually moved on the next round.

Freddie M. Garcia was disappointed with Sherwin Baguion so he gave his vote to Fame.

The deciding vote was up to Kris.

The TV host-actress pointed out: I've always said this: in order to win your audience, you need to sing songs that your audience can identify with. You definitely have the talent, Fame.

"Pero in this instance, I'm basing my vote on the impact na nagawa. Kasi nung commercial break, si Billy and Luis kanta nang kanta. That means, may recall, na-touch ang puso nila. So ang boto ko is for you, Sherwin."

After the announcement that Sherwin will move on to the next round, Kris gave advice to Fame: "You have a beautiful face and a beautiful voice. Mag-aartista ka rin, alam namin. Pero sana kantahin mo rin ang age-appropriate because you're 19. Sana yung mga kanta ni Charice."

The winner of Pilipinas Got Talent turned out to be singer Jovit Baldivino.


ASIA'S GOT TALENT. Five years later, Fame became known as Gerphil Flores when she auditioned for Asia's Got Talent.

In an exclusive phone interview with PEP (Philippine Entertainment Portal), Gerphil revealed that if she wins, she will use a portion of the prize money to revive interest in classical music.

During the grand finals of Asia's Got Talent, Gerphil again impressed judges with her rendition of "The Impossible Dream."

Her powerful performance prompted David Foster to declare: "I promise you, the world is going to know about you."

He called Gerphil his "golden girl" before telling her: "The song is titled 'The Impossible Dream' but tonight, you just made the dream possible. You absolutely nailed it."

During the auditions, David opted to use to "golden buzzer" for Gerphil, allowing her to automatically join the semi-finals of the pan-Asian show.

Melanie C, more popularly known as Sporty Spice, told the young woman that she deserves to be in a pedestal.

"You were magnificent. You heard the reaction in here tonight. To see the transformation you've made since the auditions, it's an absolute pleasure. Congratulations to you."

Vaness was shocked to see the radical transformation of Gerphil during the course of the competition.

"Who are you? When we first saw you, you were a shy, little girl, and you commanded the stage tonight. You literally took over and just said, 'Everybody, look at me, look what I can do.' Great job!"

Anggun praised her by saying. "That performance is exactly what we expected from you. You're already a beautiful girl but tonight, you were magnificent."

They are competing against four other grand finalists. The winner will be revealed in the finale of Asia's Got Talent to be aired on AXN this Thursday, May 14.


PEPsters, what can you say about the musical journey of Gerphil Flores? Share your thoughts in the comments section below.