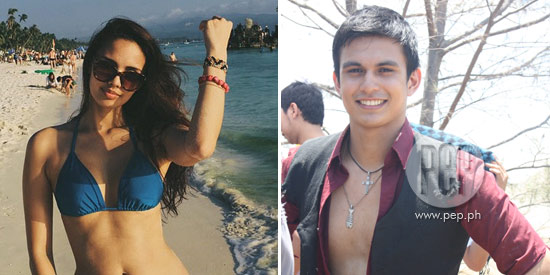 Miss World 2013 Megan Young (left) and Tom Rodriguez (right) will topbill the second TV adaptation of Mexicanovela Marimar. The first version was aired in 2007, with Marian Rivera as the lead star while Dingdong Dantes was tapped as her leading man.

GMA-7 is set to do another adaptation of Thalia’s Mexican hit Marimar with returning Kapuso and Miss World 2013 Megan Young playing the title role.

Tom Rodriguez will be tapped to play Sergio Santibanez, the role originally portrayed by Dingdong Dantes.

In a recent article published on GMANetwork.com, it confirmed that a second TV adaptation of Marimar will be aired by the Kapuso network, along with four other shows to be launched in the second half of 2015.

The article revealed that the new version will have a different take from the 2007 version, which was led by Marian and Dingdong.

In a Facebook post of GMA drama writer Suzette Doctolero, she gave clues as to how this new TV drama will tackle infidelity.

"I want you to meet Emman, the faithful husband and his wife, Mel, the cheating wife.

"Yes, yes, infidelity/cheating story but it's going to be different.

Doctolero wrote the Philippine adaptation of Temptation of Wife and the provocative teleseryes My Husband’s Lover and The Rich Man’s Daughter.

According to GMA's article, Faithful Husband revolves around "a husband who tries to pick up the pieces of his broken family after he discovers his wife's unfaithfulness."ï¿½

NEW SHOWS FOR 2015. Fans can look forward to new projects for popular tandems later this year.

A weekly show is slated for the successful tandem of Kapuso teen actress Barbie Forteza and teen actor Andre Paras. They were first paired in The Half Sisters, which is set to celebrate its first year anniversary this June.

The tandem of Bianca Umali and Miguel Tanfelix, known as BiGuel, will also have a follow-up project titled Womb For Hire. They will portray two close friends whose friendship will be tested when the young lady experiences a tumultuous journey to motherhood.ï¿½

Chlaui Mercado, the lead star of Yagit, will also have a follow-up teleserye titled Little Mommy. This time, she will be joined by Carla Abellana and Jillian Ward. This heartwarming drama is about an intellectually-challenged woman who will face the challenges of being a mother.

PEPsters, what can you say about the offerings of GMA-7 for the second half of 2015?