Did Toni Gonzaga's husband give her conditions before accepting teleserye with Piolo Pascual and Sam Milby? 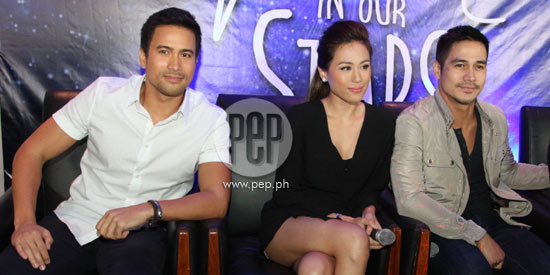 ABS-CBN's upcoming teleserye, Written in our Stars, is topbilled by (L-R) Sam Milby, Toni Gonzaga and Piolo Pascual. Their other co-star is Jolina Magdangal (not in photo).

Newlywed Toni Gonzaga did not have any hesitation when she found out that Piolo Pascual and Sam Milby will be her co-stars in new ABS-CBN TV series Written in our Stars.

It will be recalled that the singer-actress was linked to both Kapamilya heartthrobs in the past.

Piolo admitted that he courted Toni when she was still new in ABS-CBN; while Sam used to be the constant onscreen partner of Toni.

When Toni worked with Piolo for Star Cinema's romantic film Starting Over Again, they were chosen as the 2014 Box Office King and Queen by the Guillermo Mendoza Memorial Scholarship Foundation.

She said, “'Yon nga siguro 'yong maganda as you grow older and mature sa industriya, you're able to use your experiences sa soap, sa trabaho mo.

“'Yon naman ang babaunin ko sa teleseryeng ito. I can use that as an inspiration to make the scenes better, para makatulong para mas maging organic.”

Although she's already married to director Paul Soriano, Toni said about her leading men, “They all have a special place in my heart.

“Up to this day, I love them, only in a different way.

“I really just love them in a different way, in a very professional way.

“I will always be grateful doon sa teamup namin.”

Did Direk Paul give her conditions when she accepted this new TV project?

“That's one thing also that made us say yes, it's very wholesome, family-oriented.”

Aside from Toni, Piolo and Sam, this project will also star Jolina Magdangal, who is still busy doing the Kapamilya afternoon drama Flordeliza.