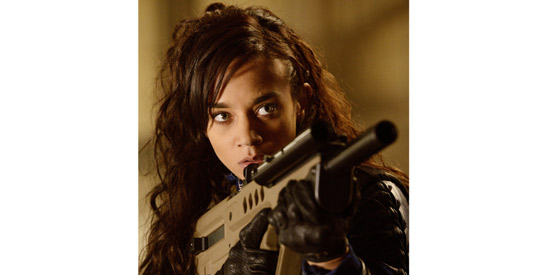 Hannah John-Kamen stars in the sci-fi series Killjoys that will air on AXN starting this August 3, Monday, at 8:50 pm.

English actress Hannah John-Kamen’s exquisite looks were not seen when she became a voice actor for the video game character Lord's Blade Ciaran in Dark Souls.

Now that she has bagged the role of kick-ass female bounty hunter Dutch in the sci-fi series Killjoys, expect her multicultural features—thanks to the genes of her Nigerian father and Norweigan mother—to hold you captive starting this August 3, Monday at 8:50 pm on AXN.

Killjoys is from the producers of Orphan Black and is created by Michelle Lovretta, the same creator of Lost Girl. The series follows a team of interplanetary bounty hunters led by a bad-ass female hero named Dutch—a top-level Killjoy—as they chase deadly Warrants (fugitives) throughout the Quad, a distant planetary system on the brink of a bloody class war. As bounty hunters, their “joy” is money thus they kill for money.

PEP.ph and Malaysia’s Oriental Daily interviewed the London-based Hannah via phone last July 28 to talk about her role and the new sci-fi series.


PEP: Are you in your pajamas right now because of the different time zones?

PEP: The trailer for Killjoys gives the impression that it is a dark and gritty series. But the show’s first episode is actually funny. How do you think Asians will like Killjoys?

PEP: Even Lucy, the machine, is funny and has a personality of her own.

Hannah: Everybody’s funny, even Dutch can laugh in situations. It’s not just Johnny who is the comical character. They have their dark sides as well.

PEP: In Your Twitter account you posted a picture of a shelf-full of graphic novels and comic books. Do you have a favorite female comic book character? And did you use this character as an inspiration for Dutch?

Hannah: To be honest, my favorite graphic novel character is The Joker, weirdly enough. I absolutely love The Joker. Because he is just...I mean my father’s a forensic psychologist, my sister is a doctor of psychiatry…I was growing up with a fascination for the human brain and why we do certain things. The Joker actually, in a weird way, is a genius. I don’t really relate with Dutch as a Joker in any way shape or form. [But] I love Harley Quinn and the Joker.


PEP: You have a preference for dark comic book characters. The character of Dutch, similar to other female hero kick-ass characters in movies and TV—such as The Girl With The Dragon Tattoo and Orphan Black—has a very dark past. Do you think strong, bad-ass female heroes also require that they have a dark history?

Hannah: I think that…they’re bad ass for a reason. They have to protect themselves for a reason. To have that defense mechanism of retaliating in that way I suppose, even in life, psychologically there’s a reason why people put up a defense barrier or people react in certain ways. Yeah, I suppose there really has to be a reason down to why they are like how they are [specially] in the way they react to certain things. It’s not necessary to have a really, really dark past but I think it’s necessary that there is a reason behind why they are what they are.

PEP: How did you get the role of Dutch? Did you audition?

Malaysia’s Oriental Daily asked Hannah why she loved her character Dutch, and how she prepared for her role. In the series, Dutch—as a child—is shown being forced to kill by a strange father figure. Secrets from her past are slowly revealed as the series progresses.

Hannah: When I got the script and I just saw the name Dutch, [I thought] wow that’s strong. I read the character and I just fell in love with her. She’s like an onion. She’s got so many layers of different emotions and she’s quite a hard character. I thought I want the challenge, I’d love to do this.. She has a very complex relationship with a father figure. My father in real life, we’re very close. He’s my rock, he’s my inspiration. It was hard to have to try and tap into a some kind of complex, awful relationship imagining your surrogate only father-figure to have brought you up in such a way of killing as a child. For anyone to have to tap into that, it’s tough. It’s hard. But if you achieve it, it’s very rewarding.

PEP: In the first episode of Killjoys, you are seen shooting guns and doing your own stunts. How did you train for this role?

Hannah: Basically, the guns were laser guns so we never actually got into live bullets…or blanks. But we did have military training, we have stunt training. I did Krav Maga, Capoeira. It was amazing. I loved it, actually loved it. That was my favorite part.

PEP: Hopefully you didn’t have to use these training in real life?

Hannah: (Laughs) I’d like to think if I was in danger or if anyone is in trouble I can handle it. But no. [Though] it is actually very handy when auditioning for other roles in things. Yeah, it actually makes you feel a bit tougher.

(According to Wikipedia, Krav Maga is an Isareili self-defense system developed for the military. It combines techniques from Aikido boxing, judo, wrestling and realistic fight training. Meanwhile, Capoeria is a martial art from Brazil that combines elements of dance, acrobatics, and music.)


PEP: Dutch seems to have a push-pull relationship with her teammate Davin. Will this develop into a full-fledged romance?

Malaysia’s Oriental Daily asked Hannah for advice, as she is portraying a strong female character, on how women can be just as strong.

Hannah: My advice to women is, basically, don’t let anyone walk over you. Whether you be woman or man, you have exactly the same equal rights. You can do anything even better than men. You can. We are strong.

PEP: The meaning of joy in Killjoys is money. Essentially, your character kills for money. This question is just for fun: is there something or someone you would kill for?

Hannah: I would kill to protect my family. If there’s someone who’d try to harm anyone I love, I would step in.