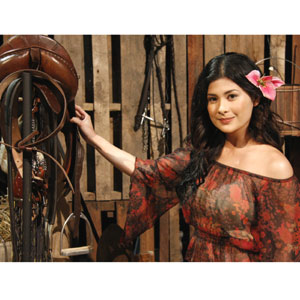 After going through a handful of possible titles—from Wild Orchid to Wild Flower to Cattleya to Ligaw—ABS-CBN management finally chooses the name of its newest daytime teleserye: Ligaw na Bulaklak.

But while the show changed titles several times, the plot, story, and vision remain the same. According to director Andoy Ranay, Ligaw na Bulaklak follows the journey of a "horse whisperer" named Lea Alegro as she goes out of her way to bring together her broken family.

Lea's desire to complete the puzzle also applies to her personal quest to discover her true worth and real love.

Direk Andoy described Ligaw na Bulaklak as grittier and perhaps a bit darker as compared to its predecessor Prinsesa ng Banyera. Combining the elements of social issues and political drama with romance, Ligaw na Bulaklak aims to present a broader picture of society that is more than just the usual boy-meets-girl story.

According to Direk Andoy, horse racing has long been part of the Filipino culture and it is something they would love to explore in this TV series. The setting would also be vital in highlighting Lea's character in the story.

Pertaining to Roxanne's role, Direk Andoy candidly said, "Daring and mas may lalim." He also explained why they chose Roxanne for the lead role. "She can be both innocent and at the same time there's this element of mystique ‘pag tinitingnan mo siya which is perfect doon sa character ni Lea."

Direk Andoy is confident that the viewers would love Ligaw na Bulaklak because of its message which is close to the heart of every Filipino.

"It's about one's desire to keep her family intact despite the odds. That is very Filipino," smiled Direk Andoy at interview's end.