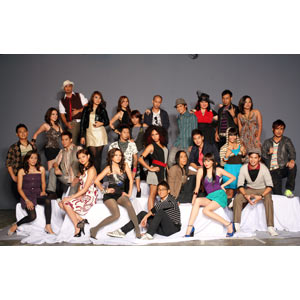 The Top 24 Pinoy Idol aspirants will be reduced by one when they undergo their first elimination round this Sunday, May 25. Watch Pinoy Idol every Saturday; Pinoy Idol Extra airs daily except Fridays and Saturdays on GMA-7.

Pinoy Idol enthusiasts will now have the chance to be updated regularly about their favorite Idol contestants. Starting May 25, Pinoy Idol Extra, hosted by Karylle and Rhian Ramos,offers behind-the-scenes footage showing the struggles in the life of each aspirant and the real issues they encounter as they battle for the "Pinoy Idol"title.throughout the competition.

Last May 21, the Kapuso Network introduced the Top 24 contestants who will receive a makeover, train under vocal coaches, and go through numerous rehearsals before they set foot onstage. Get to know each and everyone of them as they are transformed from amateur performers into singers worthy to be called the country's Pinoy Idol. Each week, some of them will be eliminated until only 12 aspirants are left to move on to the ultimate stage of the competition.


GMA-7 holds the airing rights to the Idol franchise, which is owned by Fremantle / 19 TV.

The 12 female singers who made the cut are:

Here are the 12 male singers who will move on to the next round:

The workshop phase of Pinoy Idol will begin Friday night, May 23, with the Top 12 men performing first. The following night, May 24, the Top 12 women will take the center stage. Then, on Sunday (May 25), the first elimination will take place.

Pinoy Idol is hosted by Ramond Gutierrez. The panel of judges is composed of Ogie Alcasid, Jolina Magdangal, and Wyngard Tracy.